FAQ: Commands from Border Router to Node in AD6LoWPAN

User can send some pre-configured commands from the border router to the node using the AD6LoWPAN evaluation package.

User has an option in the ADWSN-UI-Tool to select and send commands to node as shown below: 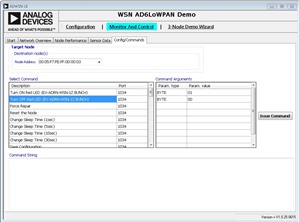 To send a command from the border router to a node, the user need to follow the 3 steps as below:

1. From the “Target Node” block in the UI tool, go to “Node Address” and choose the node.

2. Select the command to be issued in “Select Command”.

3. Click on the “Issue Command” button on the right side.

Let us consider the following example.

The node N1 has router R2 as its parent. The router R2 has R1 as its neighbor/parent and R1 is a direct child for BR (Border Router).

When BR desires to send a packet to N1, it creates a UDP packet with the IP address of node N1 as the destination. While creating the 6LoWPAN header, the BR will indicate that the next header as IPv6 routing. Now the border router will create a routing header which will hold the downward path to reach the node N1. The border router will transmit this packet with IEEE 802.15.4 address set to the next hop, R1.

The router, R1, receives this packet and based on the routing header, determines that the packet is destined for forwarding and forwards the packet to R2. This in turn sends the packet to N1 completing the transaction.

The flow is as shown below: 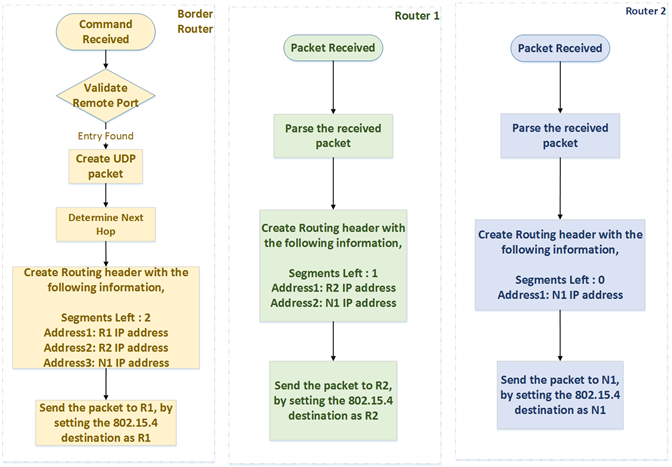 Sending the commands to the node is supported only for non-sleepy nodes in the demo application (802.15.4 MAC indirect transmission is not supported in AD6LoWPAN).

This FAQ was generated from the following discussion: Can I send commands from Border Router to Node in AD6LoWPAN?