FAQ: How to interpret the sensor data collected on ADWSN tool?

We know the data from different wireless sensors in the network gets collected by the Border Router, and is displayed on the PC monitor using the ADWSN-UI tool. How can this be interpreted - raw data ?

The sensor data collected on the Border Router is represented by the ADWSN-UI tool in 3 forms.

These 3 tabs under the Monitor And Control label are

[Start]: This contains the raw data packets in byte stream form, where the UDP packets containing sensor data from different wireless sensor motes are displayed. User need to have prior knowledge on which sensors are enabled on which motes, to interpret the received data. As this is in hexadecimal format, interpreting the results from this tab is not a straight task to anyone, unless prior information on sensors/motes is known.

The sensor data is followed by statistics information. The data highlighted in different colors above is for the following sensors (that is how this particular sensor mote is configured for in this example).

The ADT75 data in the above is 0000CF41, and it is very difficult for anyone to understand what this value is in real life (decimal/floating point format). 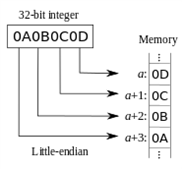 IEEE-754 Floating-Point Conversion calculator (like the one attached in here) helps you in quickly interpreting the above data. http://babbage.cs.qc.edu/courses/cs341/IEEE-754hex32.html

[Network Overview]: The network overview tab displays the payload received from the different sensor nodes under the Current Data column in floating point format as shown in the figure below. User need to know the sensors enabled on the nodes prior to identifying each sensor data. The figure displays all the four sensor data which are mounted on to the WSN Bunch boards. 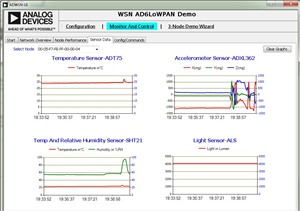 This FAQ was generated from the following discussion: How to interpret the sensor data collected on ADWSN tool?