FAQ: Is the packet format in AD6LoWPAN same as standard one?

Yes. AD6LoWPAN is standards base implementation and the packet format is same as defined by IETF.

When the application desires to transmit any UDP data, the payload is forwarded to the AD6LoWPAN stack. The stack then encapsulates the payload with a UDP header.

The entire UDP packet is encapsulated by the IPv6 header, which will have the following information (refer RFC2460). 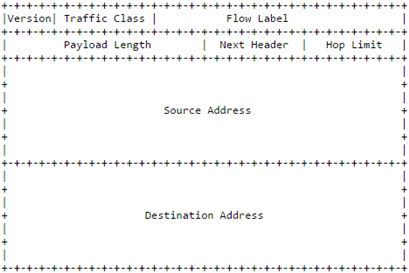 Now the packet is sent to the 6LoWPAN layer where it will add its own header before passing it down to MAC layer. Refer RFC 4944 for information on 6LoWPAN header.

The MAC layer will add its header (MHR), which will contain the following fields:

Before handing the packet down to PHY to initiate the transmission, the MAC will add its MFR (MAC footer) which will have the checksum (CRC) of the packet.

Now the PHY will include its header (PHR) with the following fields and begin the date transmission.

This FAQ was generated from the following discussion: Packet format for 6LoWPAN/AD6LoWPAN?