Concept of "Orbit" in AD6LoWPAN? Why is it introduced?

Original Question: Concept of "Orbit" in AD6LoWPAN? Why is it introduced? by NagarjunaG

What is this orbit concept? Why is it introduced in standards based solutions like 6LoWPAN?

Does the devices in the lower orbits communicate with higher orbits?

Verified Answer: RE: Concept of "Orbit" in AD6LoWPAN? Why is it introduced? by NagarjunaG

In general, a star network ensures that all the sensor motes directly send data to the aggregation device (BR). But in reality, due to various factors like radio range and other interference issues, a star network may not be possible all the time. Additional intermediate routing nodes will be required in such cases to extend the range of the deployed network. This is the case in general for a real life deployment, and if multi-hop networks are to be tested  with in a small geographical region, then a virtual environment has to be created to test all the possibilities. This is where the concept of orbits comes in handy.

The term orbit is used to elucidate the wireless sensor network easily to everyone by assuming that a border router is organized at the center of the core, with intermediate routers in several orbits and sensor nodes in the outermost orbit as shown below. This assumption makes it easy for user in setting-up a desired network topology without getting in to the intricacies of actual range between different intermediate routers or leaf nodes. Users will be able to setup a reasonably good sized network in an office/lab environment mimicking the real life wireless sensor networks using the concept of orbits. 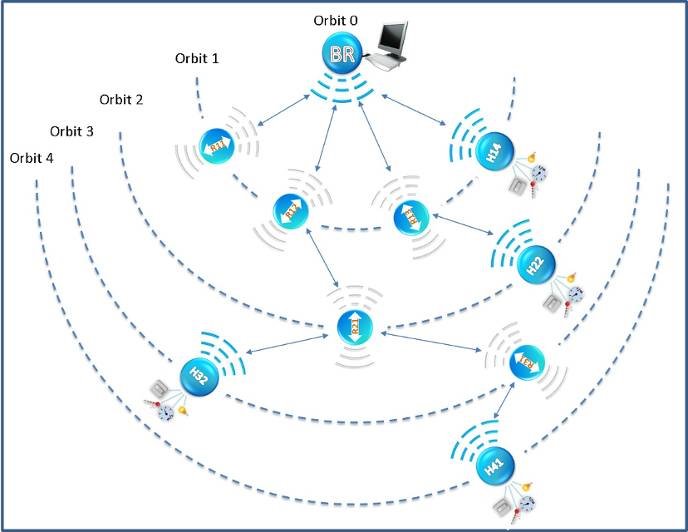 The ADWSN-UI-Tool provides an option to configure orbits for 6LR & 6LN which overrides the RPL parent selection and ensure the devices join at a particular orbit in the network. This feature, as mentioned above, is mainly recommended for use in evaluating different topologies in the office/lab and obviously is not recommended for use in actual deployments that require autonomous operation.

Question: RE: Concept of "Orbit" in AD6LoWPAN? Why is it introduced? by ezadminThis question has been closed by the EZ team and is assumed answered.