I am trying to model the transmission of a gray scaled image of size 84x100 pixels using the AD9361 models in Simulink. I attached the figures for the different models.

The following is a description of the model steps:

2- I used an unbuffer block to read the image matrix row by row, consecutively I convert each row to a column to be able to feed it in a second stage of the unbuffer block to allow me to send each pixel independently.

3- I pass each pixel value from the previous stage to a user defined function to convert the gray scaled image to a series of binary values that will pass through a 2-QAM modulation block. In the case of the AD9361, I am transmitting using a carrier frequency of 2e9 Hz, sampling time of 1.3020e-7, and the 5MHz LTE filter configuration.

4- No channel is incorporated and also at the receiver side I used a similar filter and carrier frequency, with sampling time of 1.3020e-7 divided by 1.5 as mentioned in the example tutorial of the toolbox.

5- The output of the AD9361 RX block is then passed to a 2-QAM demodulator block followed by a Matlab user defined function to convert the binary values to gray scaled values. Finally, the images are reconstructed a similar way to the transmitter side using buffers of sizes 100 and 84.

The problem I am facing:

1- If I send the image using the described schematic without the AD9361 transmitter and receiver blocks the system works fine as figure 1 shows in the attached images. 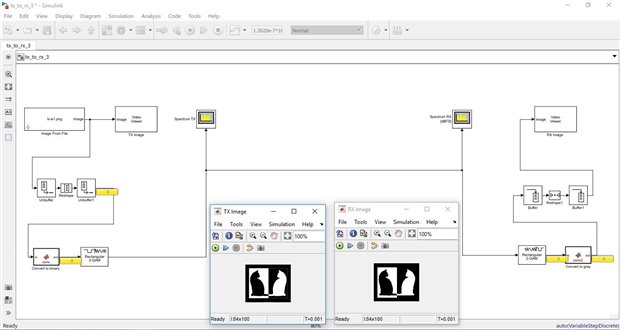 2- Once incorporating the AD9361 transmitter and receiver blocks the received image introduced a cyclic shift to the left as figure 2 shows. 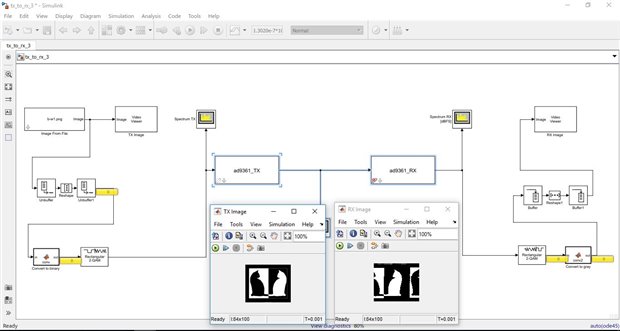 3- Changing the QAM modulation order to 4 levels the image received, but does not resolve the shifting problem.

4- Changing the QAM modulation order to 16 a black image is received as shown in figure 3.

I would appreciate if somebody could give me some clues to what might be happening.