Below are the sequences that have taken normally between source and sink using HDMI interface. 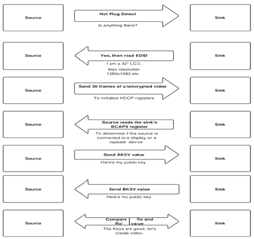 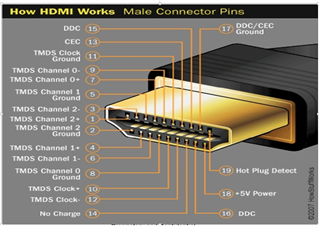 Below are the pin functionality using in HDMI interface.

TMDS: It refer to the high speed signal data, audio and video are multiplexed, eliminating the separate need for audio channels. In HDMI link includes three TMDS data channels and a single TMDS clock channel. These channels define the transport of RGB and YCbCr with different pixel sizes of 24,30,36 or 48 bits. The TMDS clock channel constantly runs at a rate proportional to the pixel rate of the transmitted video.

Hot Plug Detect:  A pin on the HDMI connector that allows the source device to sense when a display device has been connected to it and its EDID is readable. 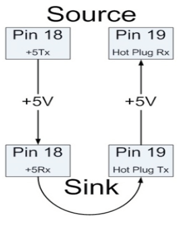 DDC: DDC carries two kinds of data: HDCP and EDID. DDC or display data channel describes the physical path used by the source and display to communicate. It is typically assigned to a pin on the interface and carries the EDID. DDC allows devices to assess each other’s capabilities and adjust themselves accordingly.

a. EDID:  Extended display information data contained in a small memory called EEPROM on each display device or HDMI sink. The source device uses the information inside to optimize the output video/audio format. All sink devices complaint to the HDMI specification must implement EDID.

CEC(Consumer electronics control) : One of the channels in an HDMI connection is dedicated to a set of advanced control functions collectively known as CEC. CEC functionality allows connected devices to control each other in useful ways.Below are the features which are supported in CEC pin

ARC: ( Audio return channel) – The audio return path in HDMI allows a TV to send audio data upstream to an AV receiver, eliminating the need for a separate SPDIF audio connection.It Supports the same audio formats as an SPDIF cable.