I have a question about analog component (YPbPr) input for ADV7482.
I summarized the questions to an attached file "ADV7482_Component_Input_Question.xlsx".
Please refer it. 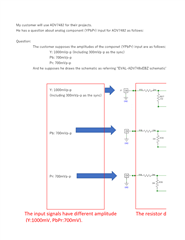