LTC2983 one probe shadowing temps of another

I am testing an LTC2983 for engine CHT and EGT temperature measurement.

The LTC2983 is connected to an Arduino through ISP.

I have two type J thermocouples connected, one with differential measurement, the other with single wire.

The two probes are connected as shown in data sheet figure #4.

Both probes terminate on a 4 mm ring, and the TC joint makes contact with the ring, i.e., they are "grounded probes".

When probe 1 is heated, probe 2 follows similar behaviour, reporting ~ 50% of probe 1's temperature, even though probe 2 is not exposed to heat.

If probe 2 is heated instead, the mirror behaviour is observed

If the heated probe is disconnected, the other probe returns to the normal temperature. 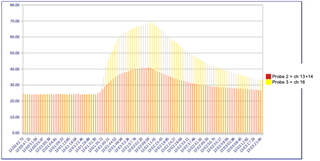 Test 2: probes rings NOT grounded (disconnected from the PCB ground)

The probes behave normally, totally independent from one another.

I have an outboard diode (actually a transistor) connected to channel 20 for cold joint temperature, and that works well.

Other connections and components are per figure #31 in data sheet (except for sensors, only two TCs connected as described above).

Given that the probes will be screwed to an engine block, therefore grounded, how can the behaviour in test 1 be corrected??