What is the ADI MEMS switch technology?

The MEMS switch technology is an electrostatically actuated MEMS switch in a hermetically sealed silicon cap co-packaged with a low-voltage, low-current driver IC. The switching element has a highly conditioned, extremely reliable metal-to-metal contact that is electrostatically actuated by a DC voltage generated by the companion driver IC.  The resultant co-packaged solution ensures best-in-class RF performance and makes the switch extremely easy to use. The figure below shows a cut away graphic of the ADGM1304 SP4T MEMS switch, the die on the left is the drier IC and the die on the right is the MEMS switch die with hermetically sealed cap. The 2 die are co-packaged in a conventional small form factor plastic QFN package. 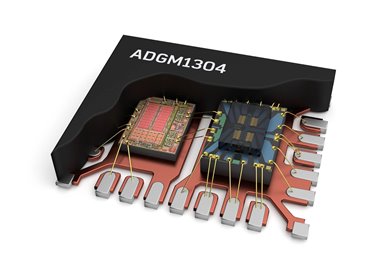 Why should I use the ADI MEMS switch?

The key strengths of the MEMS switch over conventional electromechanical relays is that it can provide best in class high frequency RF switch performance (including precision performance at 0 Hz/DC), can be 95 percent smaller, typically switches 30 times faster, has 10 times the  cycle lifetime, and can use 10 times less power.

What are the target applications for the MEMS switch?

The MEMS switch fits a broad application profile. Anywhere wideband RF and precision DC performance are needed in a small easy to use form factor with high linearity and low power requirements the MEMS switch will add significant value. Application spaces include RF relay replacement in RF test instrumentation where reconfigurable filter banks and attenuator switching is very common. Automatic test equipment is another key application space for the MEMS switch as it brings a very large size advantage to tradition relays thus enabling significant increases in channel density for the same board area used.

How do I order some samples or an evaluation board for the ADGM1304 MEMS switch?

Go to www.analog.com/ADGM1304 product page and scroll down to the Sample and Buy section.  Click on “Contact ADI” and click on “Submit a Customer Service request”. Fill in the form making sure to select “Sample Request” from the support list.

What mechanism actuates the MEMS switch?

How much power does the switch need to turn it on?

The MEMS switch itself requires not power but the charge pump that produces the internal actuation voltage to drive the switch does require a power supply.  Typically the ADGM1304 and ADGM1004 charge pump requires 10mW to 20mW of power (3mA, 3.3Vdd supply voltage).

What is the cycle lifetime of the switch?

The switch has gone through extensive qualification testing. The cycle lifetime is guaranteed at 1 billion cycle’s minimum under cold switching conditions. The switch has demonstrated capability of being able to cycle multiple times the minimum specification in typical use cases. This long cycle lifetime was achieved through careful design, contact conditioning, actuation voltage ramp control and the internal hermetically sealed silicon cap over the switch.

Is the MEMS switch sensitive to mechanical vibration or dropping?

The MEMS switch has undergone a comprehensive suite of mechanical robustness qualification tests. These included vibration testing from 20Hz to 2kHz at 50G, mechanical shock testing at 1500G 0.5msec, vibration testing using a 50G sine sweep from 20 to 2kHz and centrifugal acceleration tests at 30kG. These all followed the MIL-STD-883 standard.

The ADGM1304 and ADGM1004 switches are also qualified to a drop test height of 0.6m in accordance to the AEC-Q100 Test G5 standard. Due to its small size and low inertia the MEMS switch is significantly more robust than electromechanical relays. As is the common advice for all mechanical and solid state electronic devices, if a loose part is dropped during board assembly it is advised not to use this part and replace with a fresh one.

What is the DC voltage and current rating for the switch?

The max recommended DC voltage that can be applied across the ADGM1304 and ADG1004 switch is ±6V.  The switches are rated to carry up to 220mA of current.

What is the on and off leakage specification for the ADGM1304 switch?

The off leakage is 0.5nA max and the on leakage is 5nA max.  This specification is tested with the maximum DC bias voltage across the switch, i.e. +/-6VDC.

What does hot switching mean?

What precautions should be taken to minimize hot switching episode?

What does the continuously on (COL) specification mean?

Turning the switch on for a long period of time affects the reliability of the switch. This is specified as COL in the datasheet. The ADGM1304 and ADGM1004 have a COL lifetime specification of 7.2 years (typical) at 50°C; see Table 1 in the respective datasheets. This lifetime increases as the temperature decreases.  The COL lifetime time period of the switch must not exceed this specification to preserve good turn off reliability. As applications permit it is recommended to operate the switch with a 50:50 duty cycle or less (longer off than on) so as to avoid leaving the switch in the one state for very long periods of time at high temperatures.

What does the shunt capacitor on the Vcp pin do?

The shunt capacitor on the Vcp pin is there to help smooth out ripple on the 80V generated by the charge pump driver circuitry.  The ripple is coming from the 11MHz clock of the charge pump.  A capacitor value of 47pF was found to be optimal in minimising this noise. The Vcp cap also acts as a charge reservoir for the charge pump output allowing the drivers to pull charge when switching.

What kind of Ron variation can I expect when using a MEMS switch?

From one cycle to the next the variation would only be in the 0.01ohm range. Over a very short time scale after turning the switch on some Ron reduction is visible. For a time scale of 1msec after turning on to 100msec a downward drift of -0.4ohms would be typical.

Does the MEMS switch suffer from bounce?

Bounce has been practically eliminated by careful beam design and controlling the actuation speed of the switch.  The 80V actuating the switch is not applied instantaneously but is in fact ramped up from 0 to 80V is a controlled manner.  The ramp profile has been designed to eliminate bounce as much as possible and to improve actuation cycle lifetime.  The ramp profile is one of the key factors in dictating the length of time it takes the switch to turn on.

What is the Con and Coff capacitance of this switch?

The MEMS switch itself has very little capacitance, it is in the order of 55fF.  The majority of capacitance comes from the LFCSP package itself.  Coff is typically 1.6pF and Con is typically 3.3pF.

What is the insertion loss and off-isolation down at lower frequencies, e.g. 300kHz to 200MHz?

What is stand-off voltage?

How much of the internal 11MHz charge pump oscillator clock feeds through to the switch?

The 11MHz charge pump clock and harmonics thereof appear on the switch.  The highest value occurs at 2fo and is in the order of -115dBm, this level is observed when 1 switches is on, it increases as more switches are turned on.

How quickly can the switch turn on?

Typically it takes 30µsec for the switch to turn on.  The switch will typically turn off in less than 5µsec.

Yes, you have full independent control of all switches in these parts.  They can all be on or off simultaneously.

What is the linearity performance of the switch like?

The switch has very high linearity performance characteristics.  An IIP3 level of 69dBm typical is achieved using high power tones of 27dBm at 900/901MHz. In the case of single tone harmonic linearity performance, levels of -85dBc for second and third harmonics was typical using 36dBm tones at 150Mhz and 800MHz.  In the case of lower frequencies a second harmonic level of 90dBc is typical for a 5.4MHz signal case at 0dBm.

What is the ESD rating for the ADGM1304 MEMS switch?

The part achieves an FICDM rating of 500V. A safe automated handling and assembly process is achieved at this FICDM rating level by implementing industry standard ESD controls.

What is the ESD rating for the ADGM1004 MEMS switch?

This part has an ESD rating of 2.5kV HBM on all pins.  The ADGM1004 has internal ESD protection diodes on the RF inputs and has achieved a higher ESD rating compared to the ADGM1304. The FICDM rating is 500V. A safe automated handling and assembly process is achieved at this FICDM rating level by implementing industry standard ESD controls.

Do you have any recommendations for TVS ESD protection diodes to use with the ADGM1304 part?

A key specification to consider when choosing an external TVS ESD diode to protect the MEMS switch is its trigger voltage and clamp voltage.  Both of these should be as low as possible.  An example of a protection device that has shown to improve ESD performance of the ADGM1304 part is the Infineon ESD103-B1-02 TVS diode.

What precautions should be taken to minimize ESD risk?

What is Insertion Loss and how is it defined?

Insertion Loss (IL) is the amount of signal attenuated between the input and output ports of the switch when the switch is in the on state. Expressed in decibels, insertion loss should be as small as possible to enable maximum power transfer.

The general equation for calculating insertion loss is as follows:

where: S21 is the forward transmission coefficient, measured from port 2 to port 1 of the switch with each port terminated in a purely resistive 50 Ω load.  Note, S12 can also be used assuming the device is symmetrical.

What is Off Isolation and how is it defined?

Off isolation is the amount of signal attenuation between the input and output ports of the switch when the switch is in the off state. It is expressed in decibels and is calculated in the same manner as insertion loss

What is the Third-Order Intermodulation Intercept (IIP3) parameter?

IIP3 is the intersection point of the extrapolated fundamental power out vs. power in line and the third-order intermodulation product extrapolated line of a two-tone harmonic test. IIP3 is a figure of merit that characterizes the linearity of the switch.

What is a floating node and how does it occurs?

Floating node is a phenomena when switch beam goes to an unknown voltage levels due to the lack of a DC voltage reference. This can lead to unreliable switching actuations, possibly leading to hot switching events and cause damage to the switch.

How to avoid floating node?

Floating  nodes can be avoided by connecting high value resistors to ground to the channel of the MEMS switch which is cascaded to another MEMS switch as shown in figures below. These shunt resistors will provide constant DC voltage reference to ground and prevent any unreliable actuations. For details refer to application section in ADGM1304 data sheet. 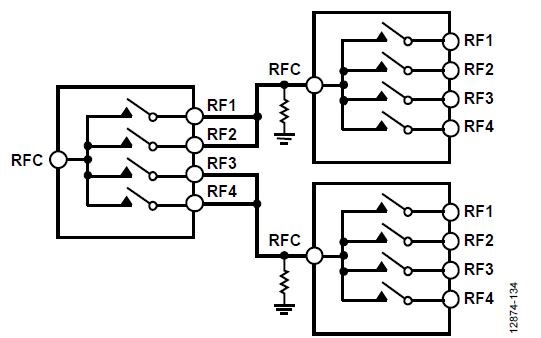 Yes, the MEMS switch is lead free. It is a RoHS compliant part. The “Z” part of the model name signifies a lead free part.

What is the MSL level of this part?