I'm operating an ADG1434 at a relatively slow pace (~40 kHz) to produce an RC shaped square wave. I am curious about how the output of the switch should behave once the S and D pins are nearly the same voltage. I have attached an image of the basic setup -- my "output" is on the drain and is simply an RC low pass filter (200 ohm, 2.2 nF) to shape the pulses I want to create. Each source is held at a DC voltage by an op amp -- currently I have one source set to ~200 mV and the other set to 13V. Scope shots are attached of the source and "vout" points from the setup drawing. The behavior that I see is that when the output is switched it follows the typical RC time constant until the voltage at the output is near that of the source. After the initial edge one can see that the output voltage is about 400-600 mV different than the source voltage and what should be the "flat" portion of a pulse instead has a very slow time constant that almost looks like a linear ramp approaching the source voltage (and the source voltage remains constant -- it has not drooped or changed to affect this output). If not constantly switched the output does reach the source voltage after sufficient time is allowed to pass. The switch digital input is being driven by an FPGA with a 3.3V IO standard. I see this behavior on all channels of the switch.

Is this the expected behavior of the switch in a scenario like this? Does anyone know the source of the slow "linear-ish ramp" time constant after switching? 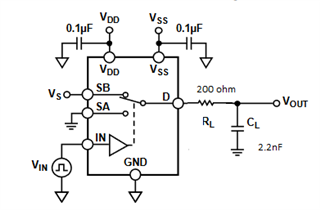 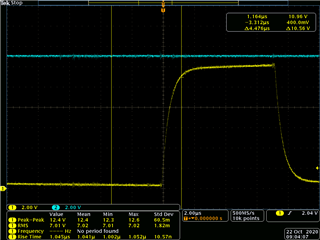 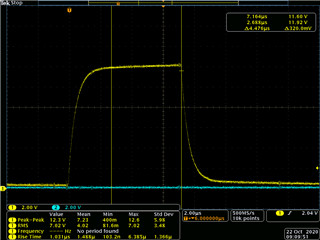