Have seen 2 failures of an ADG3304.  I need to try and get some insight of how this could be occurring.

In this design VCCA should always be less then VCCY.  The failure does not occur at power up.

Should the unused inputs (Y1 and Y2) be grounded?

And the failed part (U27).  Note the puncture in the component body: 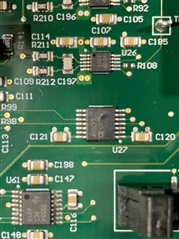