I wanted to externally power the AD4020 eval board. After going through the datasheet of the eval board I figured out that I had to do the following changes.

Switch SL9 for +Vs

Switch SL8 for -Vs

I provided the following voltages

After doing these changes I connected it to the ADI-SDP board to test it. I gave a 40kHz sine wave as the input to the ADC. However this is the output I got 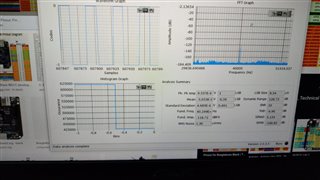 The output is varying between two codes (0 to -1) when the input is a sine wave of 200mV amplitude and 40kHz frequency. However the frequency of the output is correct. So I thought I blew up the ADC while doing the changes to the board. So I replaced the ADC and tested it again. The same problem persisted, only this time the output was a square of the right frequency but was varying between 0 and -500000 instead of 0 and -1.

Any idea why this is happening? What am I doing wrong? I also tested to see if the signal was actually reaching the ADC properly. And it is. So I am clueless as to what is wrong. Please help me debug this.