Measurement Method based on JEDEC 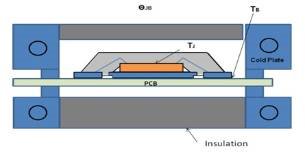 The LFCSP has a metal exposed PAD at the base that is directly connected to the GND of the die. As a result, the majority of the heat is lost through this path. Die-to-top-surface-to-air on the other hand presents a much higher thermal impedance. Because there is so little heat flowing through this path, we make the approximation that the die temperature is close to the temp on the plastic case of the package.

Below are the estimated thermal impedances of this package(with pad soldered to 4 layer JEDEC test board@0 airflow) from the package vendor.

Since the board temperature may be affected by adjacent IC’s and since the case is closer to the junction, Psi-jt is used more often than Psi-jb.  Although the board type and package construction can affect Psi-jt the values determined using the JEDEC standards can accurately be used to determine the junction temp in an working PCB.  This is because the typical values of Psi-jt are between 0.5 and 1.5 C/W, depending upon the thickness of the package type.  So at low power the case temp is essentially the same as the junction temp and even at high power the junction temp would only be a couple of degrees higher than the case.  So variations in Psi-jt due to test conditions are usually within the accuracy of the ability to measure the case temp.

So using Өjc instead of Psi-jt  to determine the junction temp, can lead to a large error in junction temp after measuring the temperature at the top of package temp(TT).  Given that Psi-jt is always much lower than Өjc.