The datasheet for the ADL5902 RMS detector shows only limited data above 5.8 GHz but the data sheet front page says it works up to 9 GHz. Can it really operate above 5.8 GHz?

Let's start by talking a look at the plot of performance at 5.8 GHz. As you can, see the temperature drift at this frequency along with the device to device variation are already fairly high (as evidenced by the vertical thickness of the red band at about 3 dB). 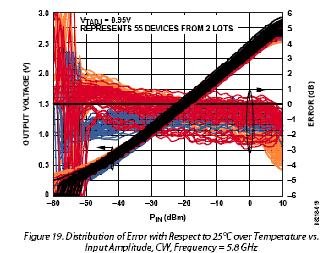 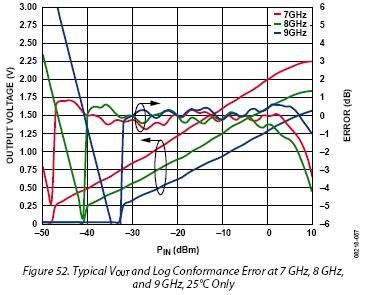 For high frequency applications (i.e. 6 GHz or greater)  where the environmental temperature is not controlled, I would recommend a device such as AD8318, AD8317 or AD8319.  These devices are well characterized at these frequencies over temperature. Unlike the ADL5902, they are not rms responding. So if the modulation scheme changes, a correction factor needs to be applied for each modulation scheme. However, if the system runs with a single modulation scheme, these devices will work fine without correction as long as they are calibrated with the modulated carrier.