RF and Microwave
Documents FAQ: We have several AD8361s and all exhibit different levels of output voltage with no RF signal present. Is this normal?

FAQ: We have several AD8361s and all exhibit different levels of output voltage with no RF signal present. Is this normal?

We have several AD8361s and all exhibit different levels of output voltage without any RF signal present.  Is this normal?

In this context, offset is defined as the output voltage level that the detector exhibits when no RF input is present. 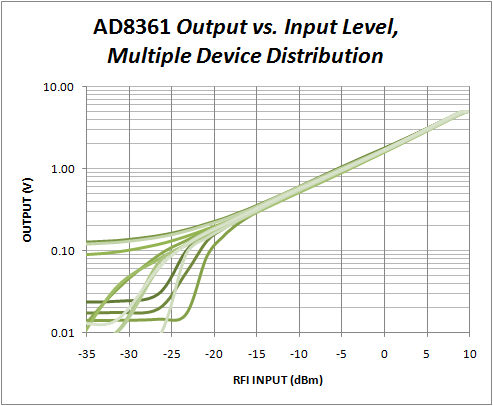 Although some devices follow an ideal linear response at very low input powers, not all devices continue the ideal linear regression to a near 0 V y-intercept. Some devices exhibit output responses that rapidly decrease and some flatten out.  With no RF signal applied, the AD8361 has a typical output offset of less than 200 mV.

If calibration is possible, then it is recommended that points be used in the linear region of the device, avoiding the nonlinear range at low extremes (or the high extreme where saturation is an issue).  The AD8361 is accurate from about -20 dBm to 10 dBm (depending on supply, as shown in the data sheet).

Fortunately, despite having the device response fan out at the low power levels (i.e. follow the ideal, rapidly decrease, or flattened out), the response curve of the AD8361 remains monotonic.  The response follows a strictly increasing function and is even increasing (slowly) in the low power, nonlinear range.  This behavior permits level shifting as a way to hide the offset by moving the curve down (offset being held under GND) by way of an op-amp.