Do you have any data on the long-term drift of RF Detectors?

The work that we have done suggests that the drift of RF Detectors over time is very low and may be within the margin of error of the measurement system used.  Testing was performed on a number of AD8362  devices (high dynamic range RF rms detector). The device were operated continuously (5V power supply applied with  a fixed RF input power)  for approximately 260 hours (11 days).  Some of the devices were operated at 25 degC while others were operated at 110 degC to try and emulate an accelerated lifespan (both temperatures were tightly controlled so as not to introduce temperature drift as a source of  error).

Because these numbers are so small, the observed drift may be partially caused by the measurement equipment. That being said, every precaution was taken to ensure that the there was little or no drift in the test equipment. Long soak times were used where the equipment was operated continuously  before the start of the 25 degC and 110 degC tests.  Also, the source RF power to the aD8362 was continuously monitored with any observed variations over time being factored out. 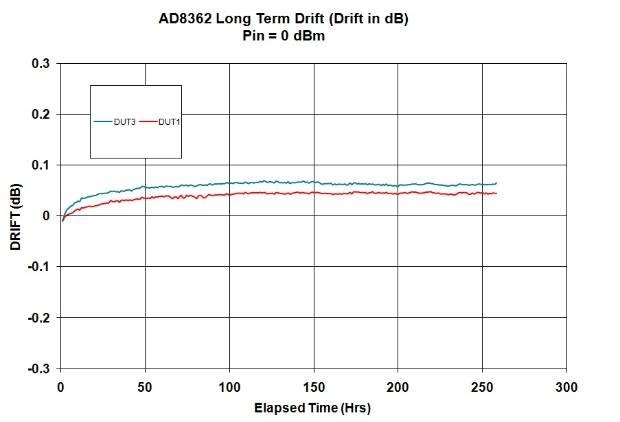