Switching an RF Detector between Measurement Mode and Controller Mode

Question: Is it possible to configure an RF Detector so that it can be switched between Measurement Mode and Controller Mode.

In this example, the RF detector is being used to control the output power of a Variable Gain Amplifier (VGA) or Voltage Variable Attenuator (VVA).  A directional coupler sniffs the output power of the VGA and this signal is fed to the ADL5902 rms detector.  With the switch configuration shown, the rms detector is operating in Measurement Mode, that is, Vout is shorted to VSET and the VOUT/VSET voltage is proportional to the log of the rms input level.  This voltage is fed to an Analog-to-Digital Converter such as AD7466 (see Circuit Note CN0178 for more information on this interface, www.analog.com/cn0178). 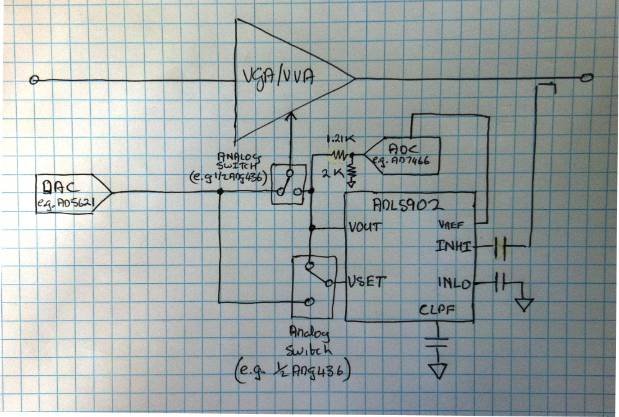 In this example, the gain of the VGA/VVA is controlled by a DAC such as AD5621.  This configuration assumes that the reading from the ADC influences the setpoint voltage on the DAC. So this digitally controlled Automatic Power Control Loop would be completed by a  or micro-controller which interfaces to the ADC and DAC.

By flipping the switch setting on both analog switches (a dual single-pole-double-throw switch such as the ADG436 is suggested for this application), the RF detector switches into Controller mode. As before the directional coupler sniffs the output power of the VGA/VVA and drives the input of the rms detector. However,  the ADL5902's VOUT and VSET signals are no longer shorted together. Instead, VSET is driven by the DAC and VOU'T drives the input of the VGA/VVA. In this mode of operation, the voltage from the DAC is compared to the equivalent power level at the input of the detector. If this relationship is out of balance (the relationship is simply the Vout vs. Pin plot that you get when operating in Measurement Mode), Vout with integrate up or down which adjusts the gain and brings the system into balance.