I have an application which can be summarized as in the attached diagram.
An AD831 Mixer receives LO signal at 88.32 MHz from PLL #1. It also receives an RF signal at 49.92 MHz from PLL #2. IF o/p is 38.4 MHz. Filters not shown.
Both PLLs are driven by a 38.4 MHz TCXO.
The TCXO also provides a signal to Reference Phase port.
On power-up with S1 closed, an arbitrary phase will be measured between the VAR port and the REF port. If S1 is momentarily opened and then closed, will the IF signal at VAR have the same phase value wrt to REF as before S1 was opened? The mixer remains powered up and the LO signal never changes. 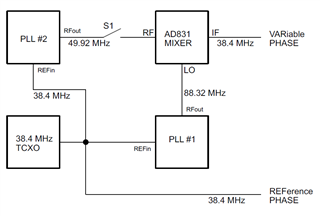