As an application engineer working with customers in the design of linear regulators and switching regulators I have been asked multiple times if a specific device needs to have a minimum load.

I have worked with LDOs and Switchers for the last 20 years and I have only seen a few devices that were NOT designed to operate at no load.

In most cases it is not an issue of stability but an issue of leakage current through the pass element. Most devices are stable at no load, so why do people ask repeatedly about this issue?  It's possible that in the past some power devices were designed to operate with a minimum load to guarantee stability, but recent devices are most likely all designed to operate with no load.

If the device had an issue operating at no load the datasheet would surely have a line a note or comment about it.

As an example the ADP1740, a very low voltage high current LDO (2A), falls into this category. Mostly because at high temperature above 85degC the leakage current from the integrated large power switch may be in the order of 100uA and may reach 500uA at 125degC (worse case). If there is true no load, that leakage current could charge the output cap higher until the VDS of the switch is low enough to reduce that leakage current to a negligible level. Effectively this creates a potential rise in output voltage at no load.

This is what you would see in the datasheet. It says 500uA min load. In this case if the user wants to use the device at high temperature a dummy load may be advisable. This load would be fairly low compared to the 2A current rating of the device. 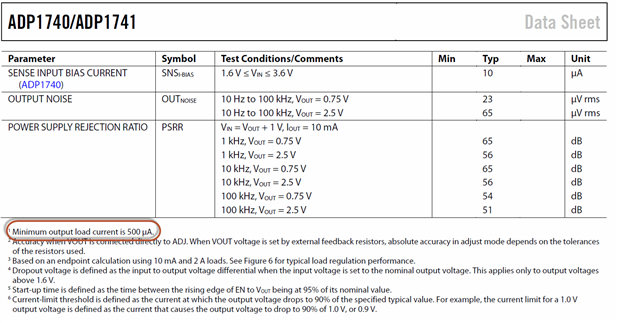 This is an issue more prevalent with high current low voltage (<1.5V) type of devices and I have not seen it in other higher voltage lower current regulators. But it's always good to double check the fine prints in the datasheet.

I believe though that there are still other sources of confusion about this topic as customers ask repeatedly even (or especially) if the datasheet does not specify a min load.

Here are some of the examples of concern explained:

- The datasheets do not specifically talk about minimum load (because there is no limitation) but often the datasheet contain typical operating graphs that show a certain range of operation. Most of these graphs are logarithmic and show multiple decades of load ranges, but of course a log scale cannot go to zero. Here is an example from the ADM7160 datasheet that shows the load range from 10uA to 200mA. This does not mean that 10uA is the min load, it's just the point where the datasheet editor decided to start taking data.

- In other tests listed in the datasheet there are graphs measured at multiple load currents (example Iq vs Vin) and most of the times there is no graph at zero current, Why is that? Just an oversight, again not because the device is not stable at zero load current.

- Another source of concern in datasheets is the fact that parameters such as PSRR, Line Regulation, Load Regulation or Noise may be listed over a certain load current range.

Here is an example of a Load Regulation specification from the ADM7160 datasheet, it states that load reg is specified from 100uA to 200mA

It does not mean that the LDO cannot operate at say 10uA or zero load, this is just the range of currents the test is performed at during production.

- In the case of switching regulators, users are often worried about the operation at light load when a device has what's called a PSM mode (Power Saving mode) that reduces the operating frequency, skips pulses, bursts pulses or a combination of all of these. PSM mode is not an unstable operating condition, it is a mode specifically designed to reduce power consumption and therefore increase efficiency at light loads. The typical disadvantage is a noticeable increase in output ripple that some users may believe it's instability. The device is not unstable in this operating mode and it can easily operate with no load at all.

Here is an example of a picture from the ADP2370 datasheet that shows the increased ripple due to PSM operation when the load changes from 800mA to 1mA back to 800mA. The increase in ripple is due to the PSM mode, the device is stable. Also the fact that the test was done at 1mA does not indicate that 1mA is the min load for this condition. 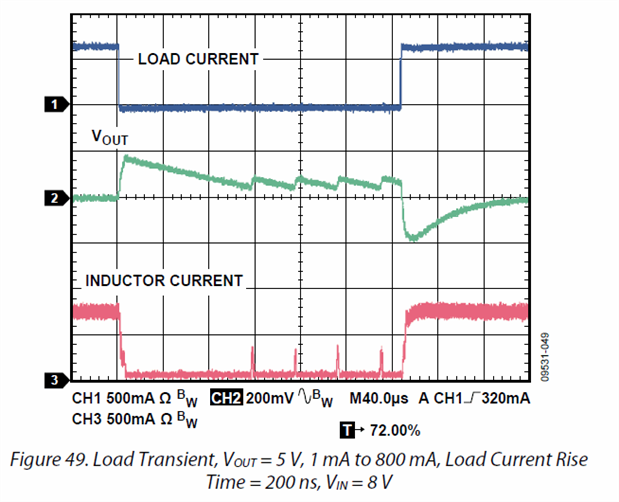 This other graph shows the ripple voltage changing with load current. In this case the graph goes all the way to zero. Indicating both the fact the load can be zero and the fact that the noise at no load may not be any worse than the noise at 1mA or 10mA. 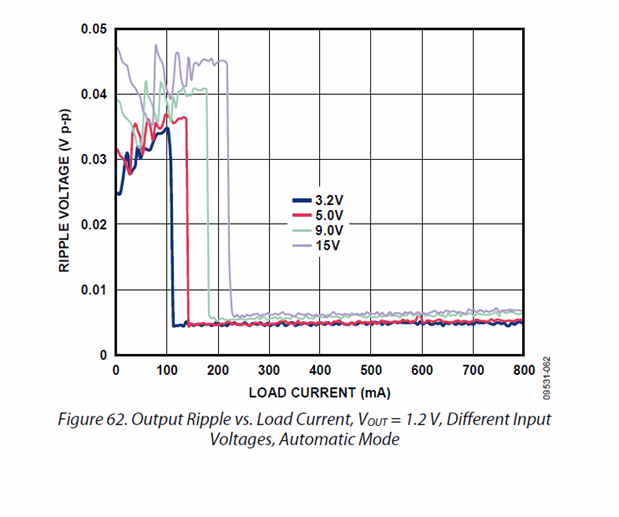 Hopefully this FAQ is able to appease some of the concerns that customers have when asking about no load operation. Again I have never seen in the last many years a device that was not stable at no load.

Let me know if you have had other sources of concerns about no load operation and I will try to respond to it.