Good morning,
I made a circuit using LTC4121IUD # PBF as shown in the schematic of the datasheet in figure 12.
As a test bench I've connected at the input Vin a DC power supply and a series resistance (Rin = 100R) and a Lithium battery of 3.7V/2000mAh at the output BAT. My measurements do not agree with the datasheet values, in particular despite the maximum charge current has been set to 400mA (Rprog = 3.01k) the battery current was different; it increases with the supply voltage in the initial section but at 14V it is limited at a maximum of 100mA. Further increasing of the input voltage lead to a drop of the current to 90mA. 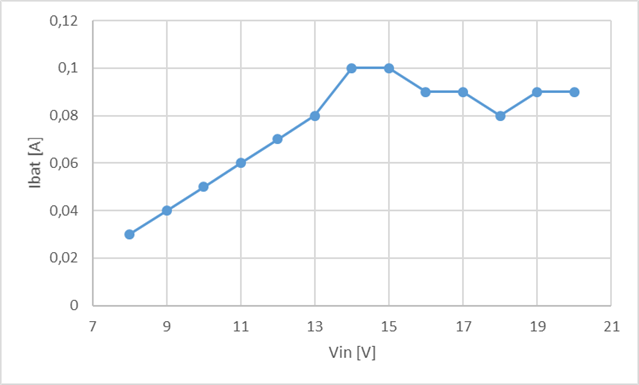 The graph in figure 13 of the datasheet shows that the charge current is initially increasing until it becomes constant at 400mA when the input voltage is 28V. My question is the following: why does the battery charge current on my circuit does not increase more than 100mA despite the selected Rprog is 3.01k (Ichrg = 400mA)?
What should I do to bring the charging current to its maximum value (400mA)?