LT8364EMSE does not work with 2MHz

We are evaluating LT8364EMSE, but it's not work as I expected.

Where we expected it to run at 2MHz, it only ran at 1MHz.

We was wondering if anyone has had a similar situation and solved it.

If anyone out there does, any information would be appreciated!

We arranged the recommendation circuit like below that is included in the datasheet of LT8364. 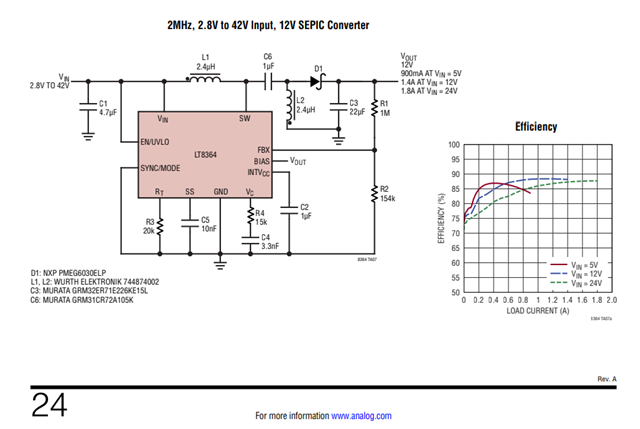 ・Stabilized output voltage of 12 V at input voltages from 8 to 14 volts, operating at about 1 Mhz.

・When the output current was varied from 0 to 600mA with constant register mode of electronic load device, it was possible to stably extract from 0 to about 500 mA, but the output voltage began to drop from about 560 mA.

・There was no significant fluctuation in the load-side DC current when the voltage began to drop, and the switching waveform appeared to be operating at a duty corresponding to the output voltage.

・We tried sync/mode grounded and ungrounded, neither runs at 2MHz but 1MHz.

・We changed the 20KΩ for frequency setting to a smaller one for the purpose of increasing the frequency and LT8364 was damaged.