The LT3045 datasheet clearly mentions reverse input protection, however I find nothing in the LT3094 datasheet.

Can a diode be inserted between the pins IN and PGFB of the LT3094 datasheet to provide such a protection, similarly to the LT3045 ? 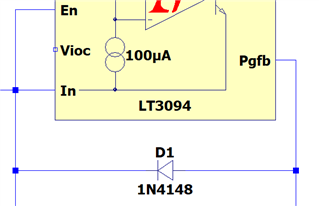 I tried to simulate the situation in LTSpice, but get unrealistic currents flowing in the input pin (5 MA).