I'm currently prototyping a product in which I use an ADP2302 as a 12Vin/7Vout 1.8A regulator, but I'm facing a strange phenomenon.

When I measure the output without any load, everything is fine, I get 7 volts.

But as soon as I connect a load, the output drops dramatically, as if there were a short...

For example, a 1k resistor make the output drop to 5 volts. And if I try to draw 100mA, the output is almost zero.

The IC seems to be working properly as it shows the expected behavior. I mean, it switches the inductor at 700kHz when the output is at 7V, but as soon as the output drops and the FB pin get under 0.6V, the switching frequency get divided.

So I suspect the inductor to be the culprit. But I dont understand what's wrong whith it...

Its specs seems to be well within the range, but maybe I'm missing something...

As for the PCB, Ok it does not look like an RF design as it should be, but I think I followed the rules : components close to the IC, high current traces are short and wide enough, BIG ground plane on the back of the PCB, short FB trace...

For reference, here are the Schematic, and a photo of the populated pcb. 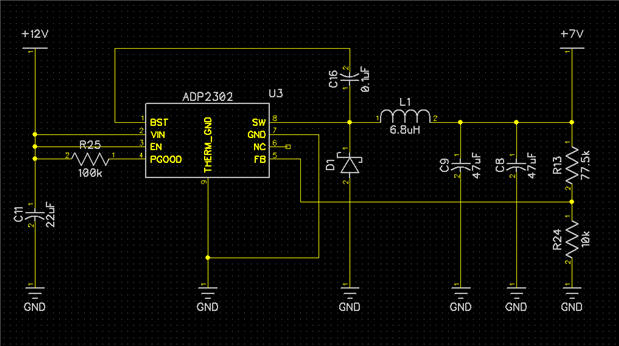 A great Thanks in advance to the one who'll find what I'm doing wrong ;-)