We use an LTC4234 as hot-swap controller for a card powered at 5V DC nominal. The maximum current it can draw is in the order of 16A. The output load capacitance is 900uF in three groups of  300 uF (220uF polymer electrolytic + 8x10uF ceramic), serving the input of three identical voltage regulators. The first capacitors are about 5cm away from the LTC4234, the second group is 10cm away and the third group is 15cm away. The LTC4234's output is connected to  a solid wide power plane, distributing the curent to the regulators.

This is our schematic: 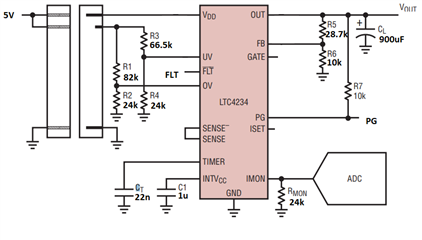 PG goes to a board supervision microcontroller, that among other things is responsible for board power-up and supply monitoring. The UV pin is also connected to a mosfet, controlled by the board supervision, to turn the circuit on an off. GATE and ISET are unconnected. The layout follows the datasheet recommendations, we mostly copied it from the evaluation board, compacting it to fit our available area.This is a 16 layer board with several ground planes.

For now, we're bringing up the board and we have a current meter clamp attached to the supply cable and we're not drawing more than 5A total, with no significant peak loads. We've also checked the input supply, and it has low ripple (less than 50mVpp measured up to 20 MHz) measured at the board power entry point, right before the  LTC4234. The temperatures seem to also be fine. The LTC4234 remains cold to the touch, and the closest on-board temperature sensor reports normal temperatures.

We're experiencing apparently random poweroffs, seemingly uncorrelated to board function. They occur every several hours and don't seem to depend on board usage. We've got them while completely idle and also under load (at least as much as we can load the board for now). The board supervisor microcontroller turns off the power if anything fails, annotating the cause that led to poweroff. It tells us that it decided to power the board off because it detected LTC4234 PG suddenly going low. The microcontroller software has been tested enough to be quite sure that it's not reporting a false positive and bringing down the board because of a PG glitch or something. The PG input has schmitt-trigger and high hysteresis, and the PG trace is very short (2cm) and goes through an almost empty zone of the PCB. We're currently not monitoring the FLT pin (we can do it if required)

There could be several root causes for this issue, but before further investigation, could you check if there's anything fundamentally wrong with our schematic or setup that could explain the issue?