I was using a LTC7004 to control the ON/OFF of a 8series LiIon battery. The nominal input voltage is 29.6V, the load is a constant power 160W camera. Use an electric load to do 160W constant power discharging test, sometime the LTC7004 is found broken

When the discharging for the input battery is done, the undervoltage protection is on and there is no output (at this moment INP of the LTC7004 is 3.3V and load is 160W), the LTC7004 is more likely to be broken.

More tests: I tested the earth impedance of each pin with a multimeter, and compared the impedance with that of a normally functional LTC7004 and found no problem.

Could anybody help me with the reason why the LTC7004 is broken and how can I do to with it? 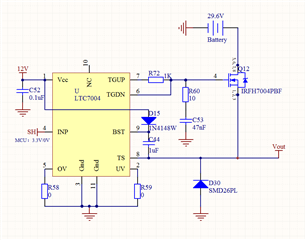