LT8362 suggested boost layout lacks a detail - and is it really a good suggestion?

In the datasheet is this suggested layout for LT8362 as boost converter as shown here: 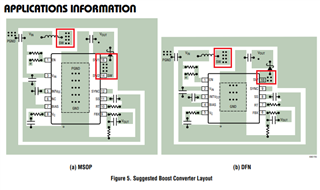 I have highlighted the SW node in red.

Question: There is no connection between the two red nodes (SW). I assume it is implicit that it is connected on another layer and simply not shown here. This is the reason for all the via's.  The number of via's also implies that this hidden connection is of a comparable width.

Are these observations and conclusions correct?

I would assume that calling this a "suggested layout" also implies optimal layout in some sense.

But this layout has SW node with via's and a trace passing under the GND planes. This adds capacity to the SW node and the via's perforates the GND plane which deteriorate EMI. This node has up to 2MHz and possibly several 10's of volt.

So, this brings me to my real question: Why is this layout suggested because it breaks the traditional wisdom of keeping the SW node small in area and with low capacity?

Below I have added my take on the layout using the same component footprints: 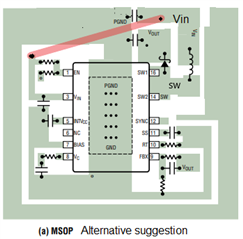 Any comments to these considerations are welcomed - especially from the one who wrote this part of the datasheet.