I'm using the LTC3351 in a product for backup power in case of power failure.

My design is based on the evaluation board with soms alternations.

I'm using the schematic below: 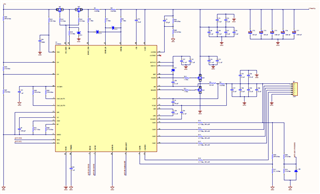 The capacitors are on a seperate PCB. I'm connecting the supercapacitors PCB with a 12 cm wire assembly.

I have made and prototype two PCB designs. My problem is that the supercapacitors don't charge if they are below 7 V. If I charge them manually to about 7 V and then connect them to the LTC3351 board they charge okay and backup is working.

If the caps are below 7 V the LTC3351 on my board tries to start charging for about a couple of ms. After that it stops and does nothing.

What can be the problem?