Hi!
We use LTC3118 in our system for the voltage buck converter/battery back-up because of its dual power path facility. The output voltage is 5V. The input voltages are 12V and 3.6...4.1V (Li-Po battery). 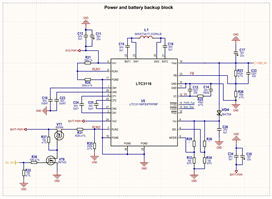 We used the same design in previous PCB production in the last two years without problems, but unfortunately, within the latest board production batch we’ve met the following strange power supply behavior:

The strange thing is that the boards of previous batches were normally working. We just moved the on-board power block a bit and slightly fixed up the PCB layout concerning this. There were no PCB layout reworks or/and significant reducing of the heat-sinking copper foil polygons. We tested the open boards, not inside a cramped enclosure. We even used a fans but it hasn't solved the thermal issue.

The steps we already made about investigating and fixing this issue:

Are there any important things to pay an attention? What else to look for?

I am actually in a standstill. We ordered a new PCB with a thicker copper foil (70μm vs. 35μm in actual board). The manufacturer said that he changed a PCB supplier in the current batch.