I've frustrated by this communication failure for quite long time, help from you is appreciated.

SPI from LTC6811-1 can send out waveforms correctly and the code is as follow, but all two LTC3300-1 has no response(can’t detect driven waveform on gate pins of MOSFETs).

The data sending to LTC3300 consists of: 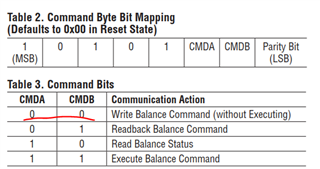 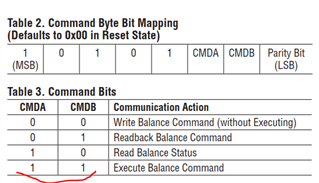 So LTC68111-1 sends four bytes to LTC3300-1 to execute a balancing action, but the COMM register of LTC6811-1 can only be filled with 3 bytes at one time, there’s one more byte(0xaf) I need to send it separately as the code shows:

// writing COMM register，including command byte, to be invoked by case 22 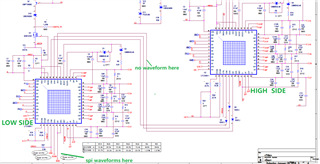 The circuitry is referred from DEMO board and there’s pull-up resistors at GPIO3~5 pins of LTC6811(also wrote 1 to corresponding GPIOx bits).

There’s waveforms can be detected at the LOW side LTC3300-1, but no waves between the two LTC3300-1s. Looking at the mechanism of LT3300-1 system, the commands shall be sent to the HIGH side one at first, then to the LOW side one. Does that mean my system is not functioning at all? Please help where is the problem.