i have avalanche photo diode with which i am trying to digitalize the current from TIA through a comparator, the diode biased using a HVDCDC

the circuit is as below 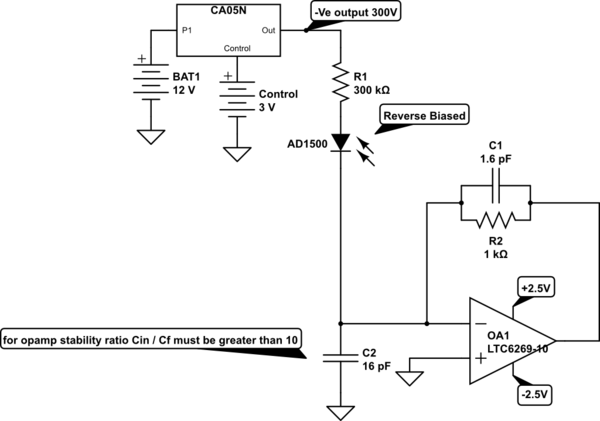 I understand that the IC is LT's but i want some light from Analog as well, as its part of you now

the output of opamp for an high intensity light is like above, we can see the opamp fully saturated, but i am clue less about the over shoot and ringing effect, this happened when i have put my bias voltage 300V, i am not able to stop the opamp to enter in to saturation.

even if i see the datasheet of DC-DC CA05N, it can maximum source 2mA of current, and the peak current of didoe is only 0.25mA, so i understood the dcdc current is exceeding 2mA

it evident that in order to make the opamp not to go in to saturation, the only way i can try is to reduce the bias voltage to as less as possible, so i operated it at 70V for which the response is as below.

reasons are unknow for the expansion of 20ns pulse to 100ns even through the APD is having a BW of 70MHz,

so in order to operate the APD properly, i understood i have to bias with higher voltage to see proper response for low light, but at the same time i have to avoid saturation.

i feel limiting the current to the TIA will solve problem, kindly suggest some ways to bypass the excess current which is to the opamp.

Kindly throw some light on behaviour of APD in saturation also

Update: After few discussions over other forums online i understood that the ringing and over shoot are because of the unstability of LTC6269-10, even though i try to maintain the Cin/ Cf ratio of the decompensated opamp to 10 still the over shoot and ringing are seen why ?

Kindly also suggest me few app notes to handle the APDs, i have seen few LT notes like AP92 but could not find matching circuits for mine, as mine is 300V bias

If this cannot be discussed on Analog forum, kindly forward this to the LT team