My name is Maciej.

I tested ADXL356 and ADXL357 accelerometers. The test consisted in placing the sensors on a professional vibration exciter from TIRA GmbH. The sensors were soldered to the EVAL-ADXL356 / EVAL-ADXL357 evaluation board, and the board was screwed to the metal base (as shown in the attached picture).

The metal base was screwed to the Tira vibration exciter.

In the attached figure I present the FFT of signals when the vibration excitation was set to 500 Hz. 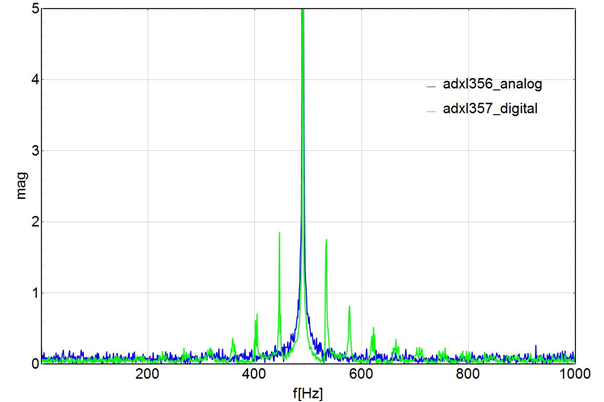 ADXL357 initialization commands are as follows:

According to datasheet after reset: no high-pass filter enabled, ODR and low-pass filter corner is 4000 Hz and 1000 Hz.

I read ADXL357 via SPI with freqency 2kHz.

Can you help me understand this strange behavior?