I am using the Adum4136 to drive IGBTs in DC-AC converter. The circuits have worked well but I am suffering occassionally damage of Adum4136. When it goes wrong, the fault pin keeps high and the ready pin keeps low. Some of them are damaged when the power circuits are not powered up. At least 4 of them are damaged when I was re-programming the FPGA and my fault detection circuit indicated something went wrong. Reset the circuits cannot fix it but it  can be fixed by repalce the Adum4136 with a new one.  Is it possible to find out a way to avoid this?

I am using isolated DC/DC supply to generate 15V and -9V for the high voltage side. Desat pin is connected to 100pf capacitor and 1K resistor to the C terminal of IGBT. 12 Adum4136 are sharing the low voltage side 5V supply. Their ready and fault pin are pulled up by 10K resistor and Ready pins are connected together to achieve wired AND thanks to the OC gate designed for this pin.So are the Fault pins. The 47 ohm gate reistors are used to avoid exceeding the 4A output capacity. The Ready and Fault pin are connected to a AND gate (SN74HC20). 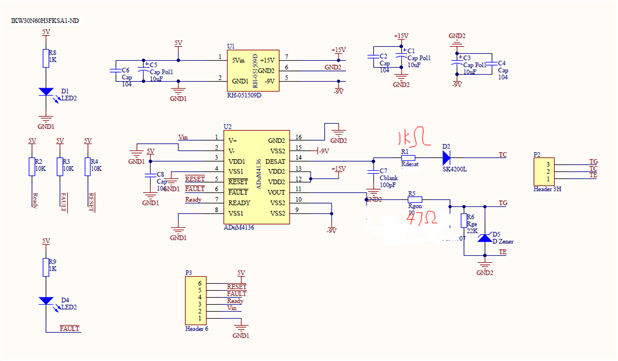