Wireless Charging is Easy and Reliable

Wireless charging of many types of devices has some obvious advantages in convenience, especially for small devices, while also improving safety. For some implanted medical devices, it is an imperative. Now that the iPhone has had wireless charging for a while, this mode of operation may well become the norm.

Most newer cellphones have wireless charging capability – including iPhone 8 and X, Google Nexus, Samsung Galaxy, and Nokia Lumia. Watches and medical devices are moving toward wireless charging for the simple reason that they have no room for a connector. Cameras and headsets add this feature for ease of use.

And wireless power transfer, or wireless charging, is so handy. The idea of laying your cell phone, your watch, your camera, and your hearing aids on a pad on the dresser before bed and having them all charged up by the AM is very attractive. This is just as true for many industrial devices. If you design any type of portable device, you should look into wireless charging.

In many applications the main competition for wireless charging may be using a primary (not rechargeable) battery. That’s fine if you have a really low power requirement so it will not need replacement often, room for the large battery, and room to make it easy to get to. But, implementing wireless charging is becoming really easy and reliable. And charging pads will soon be available in restaurants and airports – and, of course, in coffee shops.

Devices with a Qi logo are guaranteed to work with certified transmitters in charge pads, enabled autos, and embedded tabletops. This is important for consumer electronics, where users can expect to have Qi transmitters in their home, car, office, coffee shops, airports, and hotels. For consumer applications, that’s great; for industrial/medical devices, it may not matter at all – or could even be considered a security risk.

The frequency used for Qi chargers is between 110 and 205kHz for the low-power chargers up to 5W and 80-300kHz for the medium power up to 15W. The Qi specification covers both the base station for charging and the device to be charged. Base stations typically have a flat surface onto which the user places one or more mobiles. To maximize coupling there are usually alignment markings on the base station pad. The mobile unit is placed flat on the base station surface, with its coil(s) parallel to the transmitter and the gap between them of less than 10mm. A design block diagram is shown in Figure 1.

The base station doesn't activate unless a compatible device has been placed on it. It determines this by sending an intermittent test signal to check if a Qi-compliant device is present. The mobile device responds to this ping by communicating the received signal strength. 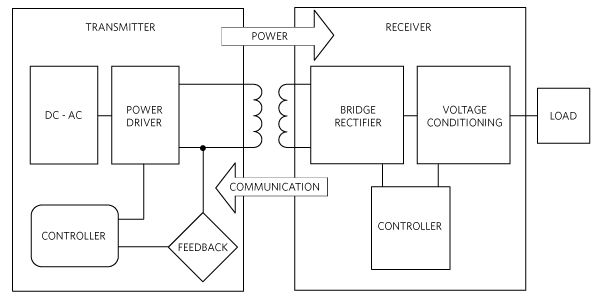 The PMA (Power Matters Alliance) SR1 (v2.0), now called AirFuel, power transfer protocol uses a different frequency than Qi, along with different connection protocols, but operates about the same. Starbucks uses PMA in their Powermat charging pads, though they are now updating the system to include WPC Qi (since Apple chose that standard).

The proprietary NFMC type wireless charging has surprising levels of deployment and certain applications have been using wireless power for 20 years, including implanted neurostimulators. The technology has improved over that time. Millions of products have been shipped using proprietary near-field magnetic coupling.

Several manufactures produce ICs for the task of wireless charging. Maxim offers the excellent MAX77950 WPC/PMA dual-mode wireless power receiver. This chip meets the requirements for both the Wireless Power Consortium Qi low-power (v1.2) and the Power Matters Alliance SR1 v2.0 WP protocols. See Figure 2 for a functional diagram. Using coupling with any WPC or PMA transmitter, the chip provides output power of up to 12W. 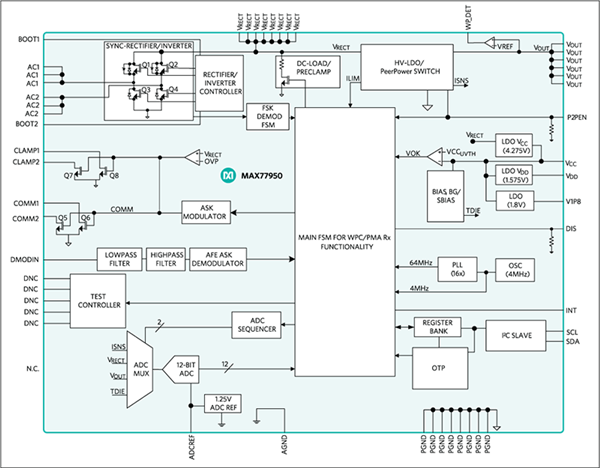 The MAX77950 receiving coil connects to an efficient synchronous rectifier whose output connects to a precision LDO regulator. The digital control and communication for both standards is done across the same coils as the power transfer (i.e., in band). The IC’s precision output current and voltage-sensing scheme provides accurate feedback to the transmitter. There is a power good signal that is programmable for low and high voltage values. 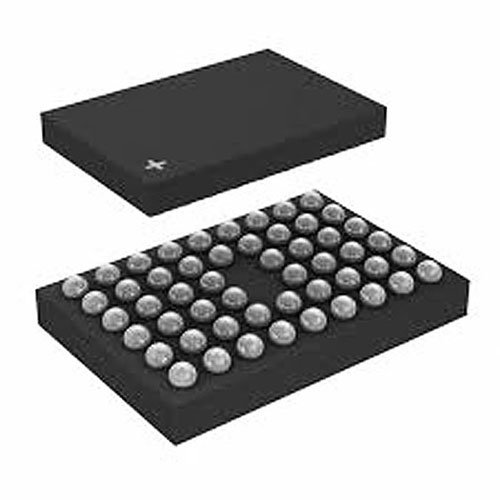 The diminutive package of the MAX77950

The chip also has an I²C serial interface that is used for communication of status and alerts to an application processor. The IC provides for foreign object detection, so that non-WPC/PMA devices or objects will be ignored. An overvoltage event may occur when the mobile device is moved over the transmitter's surface, or when partially removed and quickly replaced on the power transmitter. The IC has pre-clamp and clamp features to limit the rectifier-output voltage.

As a special function, the IC can operate as a transmitter, enabling power transfer to another peer device using in-band ASK communications. This is called PeerPower

The chip comes in a tiny 6 x 9mm WLP package and has an operating ambient temperature range of -40° to 85°C. An evaluation kit (MAX77950EVKIT) is available. 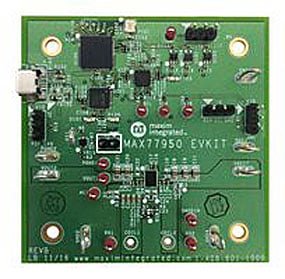 Another Method Worth Noting

Resonant wireless charging is a version that potentially offers longer distance and higher power levels – maybe for EV charging at 5 or 10kW. The technique offers sufficient enough promise that both standards bodies have incorporated a form of resonant technology into their specifications. The 1.2 version of the Qi standard added resonant charging. Some reports I have read show an efficiency of 75% at a distance of 8 to 12 inches. Many companies are working in this area; two prominent ones are WiTricity and Qualcomm.

Deciding On a Rechargeable Battery Type

For your rechargeable battery, you could use nickel-metal hydride (NiMH) or Li-ion, or maybe silver-zinc. The silver-zinc type is mostly used for hearing aids and are cost effective but low capacity. They do have a higher energy density than other types, but there are only a few suppliers and they are limited to <200mAh. There are different ‘blends’ of silver-zinc, so be sure to check the spec sheet.

NiMH batteries cost a little less than lithium, but have lower energy density and provide only 1.2V. A 300mAh coin cell NiMh rechargeable battery with a 25mm diameter and 7.25mm thickness can cost $3.50 each in 500 quantity. These batteries are mostly larger and higher capacity and often come in standard A, AA, AAA, and 2/3AA packages.

Wireless Charging is An Excellent Option

Adding wireless charging to any low-power portable device is almost always a good thing to do – since the IC manufacturers and the wireless consortium groups have the system design pretty well defined, the total component cost is reasonable, and the components are readily available. But for a higher power device, such as an electric drill, it is probably not practical. If 1 to 15W charging rates will work for your design, it is certainly worth looking into.