I have been a member of the industrial robot standard group ISO 10218 for some years now. However, I have only written a few blogs on the functional safety of robots. Part of the problem has been where to start. Is it possible to accurately describe speed and separation monitoring without an understanding of the IEC 61496 series? Do I need to give an introduction to ISO 13849, so people understand categories and PL before I talk about the safety integrity requirements of robots? Can you start with speed and separation monitoring without first having covered safety rated monitored stop? If I start with the essential but boring stuff before I cover the more interesting higher-level stuff, will I lose the audience? Do I start with fixed robots, cobots or mobots (mobile robots)?

There have always been easier blogs to do. When faced with this often the best thing is just to jump in and start. So I started last month with an introduction to ISO 13849 and will now continue.

Robot-related topics that I would like to cover in the coming year include:

However, depending on other interesting topics that come up I might insert a non-robot topic or decide to combine some of the blogs.

A typical industrial robot will look something like the below. 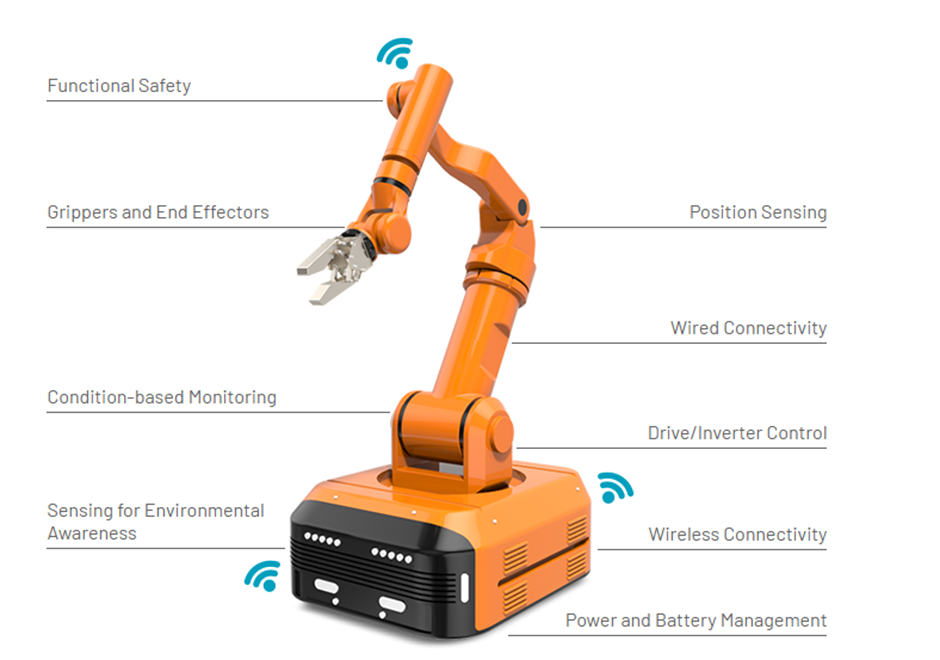 The picture of a typical industrial robot on the Analog Devices Industrial robotics homepage shows why a company such as Analog Devices is interested in robots. A robot needs lots of sensors, power management, communications as well as milli-meter placement accuracy, high speed, high safety and cyber security which are all areas where ADI plays.

Getting back on topic, let’s start with the definition of a machine. I was going to get one from the EU’s machinery directive, but actually the one from ISO 12100 is sufficient.

Figure 2 - Definition from machinery from ISO 12100

Then for the relevant industrial robot definitions let’s look in ISO 10218. There are in fact several relevant definitions including:

According to ISO 10218, an industrial robot is an “automatically controlled, reprogrammable multipurpose manipulator, programmable in three or more axes, which can be either fixed in place or mobile for use in industrial automation applications” and then an industrial robot system is “system comprising:industrial robot;end-effector(s); any machinery, equipment, devices, external auxiliary axes or sensors supporting the robot performing its task”.

The EU machinery directive recognizes the difference by categorizing an industrial robot as a partially completed machine since the robot on its own can accomplish nothing and a risk assessment on a robot is therefore not possible.

Fun fact after all the boring definitions - did you know that Mars is the only known planet inhabited entirely by robots!

And back to the definitions, ISO 10218-2 defines an industrial robot cell as “one or more robot systems including associated machinery and equipment and the associated safeguarded space and protective measures” and an IMS as “group of machines working together in a coordinated manner, linked by a material-handling system, interconnected by controls (i.e. IMS controls), for the purpose of manufacturing, treatment, movement or packaging of discrete parts or assemblies” and an industrial robot line as “more than one robot cell performing the same or different functions and associated equipment in single or coupled safeguarded spaces”.

The report entitled “The evolution of the EU robotics market” gives additional definitions to the above.

The next topic to consider is how robots and humans might work together. If the robots are in cages, then the safety is well understood. Typically, there will be an interlocked door and if the door opens the robot stops. But what if we want the robots to come out of the cages then there are several possibilities of how humans and robots can work together.

Firstly, we need some terminology. I will try to express these in my own words rather than quote the exact text from the standard.

Restricted space – personally I don’t like this term because to me it implies that humans are not allowed into the space. However, the term is in long use and instead means that portion of the maximum space to which the robot is restricted by either software or hardware limiters.

Operating space – that portion of the restricted space in which the robot moves to complete its assigned task(s).

Safeguarded space – the space where risk reduction is implemented using things like laser scanners, 3D TOF, light curtains, soft axis limiting etc. The safe guarded space can be fixed or change with the movements of the robot.

The above definitions can then be used to indicate various levels of interaction between operators and robots. Subsequent blogs in this series will highlight the measures that need to be in place for each of these.

Figure 4 - Levels of interaction between operators and robots

The first step in the above is to get the robots out of their cages. This is not often possible for instance if protection against flying objects is necessary. But where possible a reason often given is that it frees up space on the factory floor. However, this is not always true as you need to allow for stopping distances and sensor capabilities if you bring the robots out of their cages and so it might actually lead to the robot taking up more space or having reduced robot productivity since it keeps tripping as humans pass by.

Previously I gave a short introduction to the functional safety for robots, cobots and mobots – see here.

If you want to prep. for the upcoming blog series, the following podcasts are good:

Also, the IEE provides an impressive list of available robots. Now I just need to find time to complete the blogs promised at the start of the article.

For all previous blogs in this Safety Matters series see here.