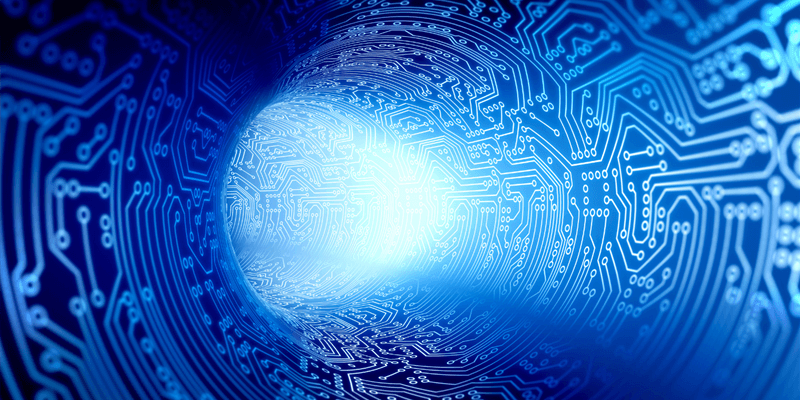 The 5 Things You Need to Know about RF Matching Networks

RF is the closest thing I know to magic. Some of it can be very complex so here are five ideas with terminology to understand so that you won’t be lost in RF matching conversations.

The performance of an RF matching network is frequency-dependent, so it is important to ensure that the network provides the desired level of impedance matching over the desired frequency range. Two of the most important plots showing this are the Return Loss and the Insertion Loss plots of the network.

Return loss is a measure of the amount of power reflected back from the transmission line to the source due to impedance mismatches. The reflected signal will degrade the power of the transmit signal so you want low return loss by minimizing reflections to maximize power transfer. As a rule of thumb -10dB is an acceptable level of reflection loss. That equates to about 10% of the signal power, the lower the better. In the plot below you can see return loss over a frequency range, showing areas with good and some with bad performance. 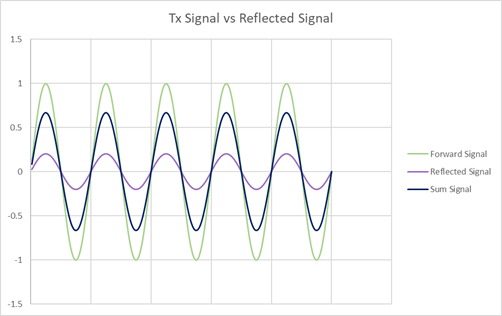 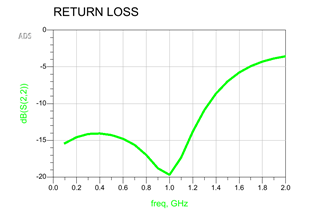 Insertion loss refers to the amount of power that is lost as the signal passes through the matching network. It is important to minimize insertion loss to ensure that the network does not significantly reduce the power available at the load. For example, you would typically not use resistive only components in the matching network. You will expect to have some loss across the matching network, from the transmission line and passive or active components in the network. Keeping this to a minimum is best for signal performance, the closer to 0dB the better however 1dB to 2dB is an acceptable level of loss usually. 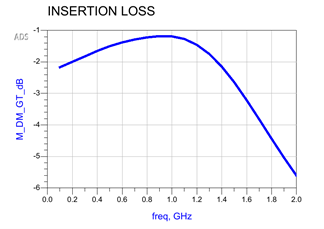 The Smith chart is a graphical tool that is used to analyze and design RF matching networks. It is a polar plot of the complex reflection coefficients and provides a visual representation of the impedance. This is another, more detailed, view of the loss plots. The impedance you are matching to is in the middle of the circle, with an open circuit at the rightmost point and a short circuit at the leftmost point on the axis. When the trace is above the horizontal axis it shows as being more inductive, below the axis is more capacitive. 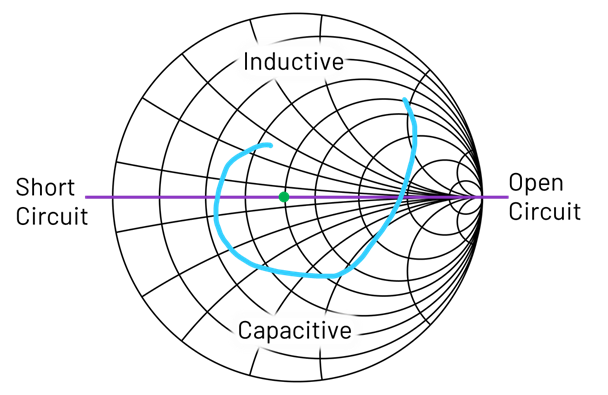 When using the smith chart the intent is to transform the desired frequency on your trace to be as near the center point as possible to achieve the best impedance matching. This is done by using some different matching network topologies to add or reduce capacitance and inductance.

Several techniques can be used to design an RF matching network, such as series and shunt LC networks. The choice of technique depends on the desired impedance matching ratio and the frequency range.

Series matching: A series matching network consists of passive elements (such as inductors or capacitors) connected in series with the transmission line.

The network most suitable for a given application will depend on the desired impedance transformation needed. This information can be derived from the Smith Chart by adding L or C components to move your impedance trace. 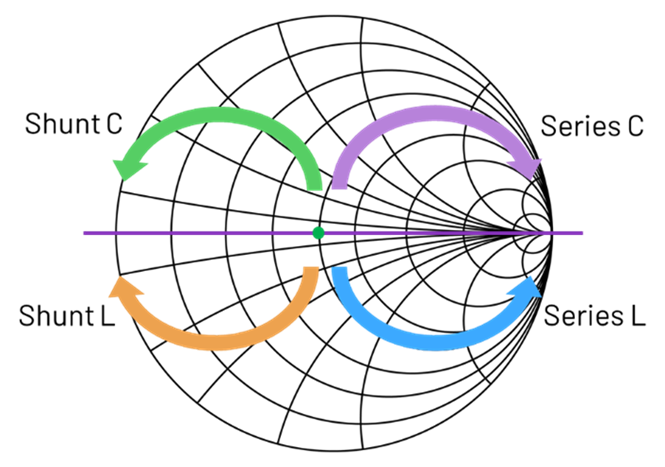 S-parameters are a set of electrical parameters used to describe the behavior of RF components such as amplifiers, filters, and transmission lines. They are used to predict the performance of these components when used in a circuit or system and are typically measured using specialized equipment such as a vector network analyzer.

S-parameters are defined in terms of the scattering matrix, which relates the input and output signals of a device or system. In a two-port model, there are four S-parameters: S11, S12, S21, and S22.

There you have it. If you can understand those 5 topics at a high level then you know what a matching network is, why it’s needed, how to see its performance and how to make it better. Knowing those general rules of thumb will be how you start the conversation because you know if the return loss is less than 10dB you’ve got a problem. You’ll be well on your way to becoming a magician!