Most of my earlier blogs have been on the basics of functional safety because I wanted to cover the fundamentals. I feel now is a good time to cover some more interesting topics and today's topic will be industrial Robots, Cobots and Mobots.

I think everybody knows what a robot is. Robots are big scary machines that typically need to be kept in cages and the functional safety requirements generally involve door interlocks, laser scanners and such. The goal is to keep the robots separated from people. All the safety can be designed to the machinery safety standards ISO 13849 and IEC 62061 (machinery interpretation of IEC 61508).

COBOT stands for collaborative robot. These are robots which are designed to interact with people and where physical contact between the person and the robot may occur. Some people object to the term collaborative robot and say that there are no such robots but rather collaborative applications. The standards ISO 10218-1 and ISO 10218-2 (both parts of ISO 10218 also known as R15.06) give design and application requirements for robots and have some small bits on collaborative operation. In general, they advocate safety integrity requirements of SIL 2, HFT=1 according to IEC 62061 or PL d, CAT 3 according to ISO 13849 unless a risk assessment shows otherwise. 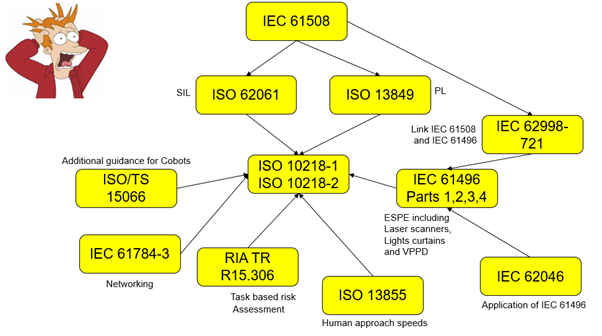 Also available since 2016 is ISO/TS 15066. This technical specification is referenced from ISO 10218-1 and ISO 10218-2 and gives additional guidance for “collaborative robots” where “a robot system and people share the same work space.” Figure one is a good illustration of a robot system with a normally protected operating space and a collaborative operating space. This is also covered in the video below. One on key topics in ISO/TS 15066 is “Power and force limiting”. In this mode of operation physical contact between the robot and the operator is expected either deliberately or inadvertently. Risk reduction is achieved through inherently safe design (e.g. removal of pinch points or the use of padding) or using safety functions. Annex A gives limits for the maximum pressure and force allowed during contact for 30 different body locations. It gives no limits for “contact with face, skull and forehead, contact with these areas is not permissible”.

The graphic above shows some of the most relevant standards for robots, cobots and mobots. I never really got to mention mobots. A mobot is a mobile robot more commonly known as an AGV (automated guided vehicles). There currently is no up to date standard that I know of that covers mobots or AGV but I understand work is underway on a new one. Until then ISO 13849 would appear to be the most relevant standard and it would seem logical to use the force and pressure limits from ISO/TS 15066 Annex A for any potential mobot/human contact.

I note that a review of several robots advertised as suitable for collaborative applications do not meet the suggested safety integrity requirements from ISO 10218-1. Some have PL d but only a CAT 2 architecture and some have a PL of b which is the lowest level defined in ISO 13849. In addition I fear that many end users are not doing a suitable risk assessment on their final applications. Perhaps as people become more aware of the latest standards things will change.

Today’s YouTube video comes from Yaskawa and is a very good introduction to Cobots and collaborative operation – see https://www.youtube.com/watch?v=4JNJ1LHSAwA&t=23s

For next time, the discussion will be on the functional safety requirements for industrial networks.