The frustration among members of Analog Devices’ temperature measurement team was palpable. Over the previous few years they had designed a series of temperature sensors with increasing accuracy – starting with models providing temperature readings within a half a degree Celsius down to a mere quarter of a degree Celsius (0.25°C). This quarter-degree accuracy was over a wide range of temperature, from -40°C (a typical winter day in Antarctica) to 105°C (past the boiling point of water.) These temperature sensors were small, as well, sitting inside a package just 0.75 millimeters thick – just a little thinner than a piece of spaghetti. 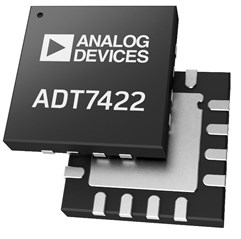 Now the team was hearing from healthcare, food transportation and other customers who wanted more. To meet evolving government standards, they required accuracy be reduced to a mere 0.1°C over a temperature range of 25°C to 50°C. On top of the accuracy requirement, customers also wanted it to be even smaller and low power. So, ADI’s temperature measurement team began exploring ideas to squeeze more accuracy from the silicon. In the back of their minds they knew a long haul was ahead; design, development and testing a new semiconductor product can take years.

But frustration melted away into resolve when a member of the team had an “aha!” moment. He believed the requested accuracy was already there, in an existing product. His “back of a napkin” proposal also had another critical benefit, eliminating the need for customers to calibrate the sensor after assembly, saving time and money. To understand how cool this is (no pun intended) you need to know one fact about semiconductors; the actual temperature measuring circuit sits inside the plastic case you see above. Those silver legs connect inside to a piece of silicon – the sensor circuitry. The legs must be soldered to a circuit board in order to make an electrical connection to the rest of the components in the product ADI’s customers are building.

Solder is a metal alloy heated to high temperature (≈260°C) and melted over items to electrically connect them. It’s brilliant stuff except, in the case of these types of temperature sensors, the heat causes something called “solder shift.” It changes the accuracy of the sensor, requiring a time-consuming re-calibration of the circuit. (One competitor even advises against soldering their solution, meaning they expect their customers to completely change their own manufacturing process in order to use the competitor’s part!)

ADI product designers felt there had to be a way to design a printed circuit board that would mitigate solder shift. With their deep understanding of the thermal dynamics of the silicon, the metal lead frame, the plastic package and the printed circuit board, they dove into the task.

The “a ha” moment? It took months of rigorous testing and retesting as the microscopically small silicon was trimmed - and tested some more – until they had a reliable solution. The result was a new product from Analog Devices, the ADT7422, the accuracy of which meets the rigorous clinical thermometry specification set by the ASTM, an internationally recognized standards organization. When the ADT7422 is soldered onto the EVAL-ADT7422MBZ printed circuit board (which is smaller than a human finger) the absolute accuracy of 0.1°C is maintained and no further calibration is required. And since the ADT7422 is a digital sensor, it is truly a “Senor to Bits” signal chain solution, providing an easy digital connection to any microprocessor. 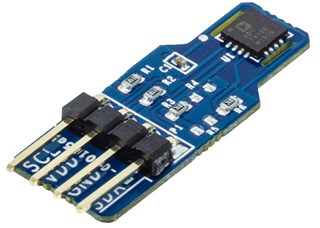 Sometimes tech leadership is planned out years in advance. Other times, as with our new groundbreaking, highly accurate ADT7422 temperature sensor, it begins in as much time as it takes to say “Aha!”