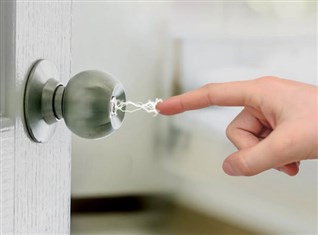 You bet it hurt, with thousands of volts of electricity discharging from our fingertips to that doorknob. Lucky for us, the electro-static charge may be high in voltage but very low current, so all we hurt is our pride when we yelp like a little puppy. Not so for electronic devices built with integrated circuits. Electro-static discharges way smaller than what we get from a doorknob can severely damage ICs.

(Quick aside: While doing background for this piece I learned even though transistors had been around since 1948 and ICs since the late 1950s, it wasn’t until 1978 that engineers traced the source of failing ICs to static discharge. Further research revealed how different electronic devices have different levels of vulnerability to static. Standards were established so manufacturers had guidelines for dealing with electrostatic discharge, a.k.a. ESD. Thank you to the ESD Association, which has been around pretty much since the discovery of the effects of ESD on semiconductors, for providing some of this background.)

There is a great need for ESD protection by designers of systems for applications as diverse as manufacturing, solar arrays, robot-assisted surgery and “Smart” Building applications. In these and other applications data is constantly being passed between devices to ensure the overall system is performing at peak efficiency. (Something we all want during robot-assisted surgery!) However, the reliable and accurate flow data is under constant threat from electrostatic discharge. To address the ESD challenge faced by designers of those systems, ADI has developed the new ADM2867E and ADM2561E. Both solutions employ a robust communications protocol known as RS-485, which has long provided a safe, secure, and reliable way for equipment (even if up to a kilometer away) to be able to exchange critical information on their status. ADI added built-in ESD protection (indicated by the letter “E” appended on the model number) to further protect data flow even in the noisiest environments.

Another challenge faced by designers of equipment intended for high-noise environments is the disruption of power to the very equipment intended to alert system managers of trouble. In the past, designers used coils to isolate machines’ power supply, not only from ESD (and other noise sources) but from other pieces of equipment potentially failing under duress. These methods were bulky and power-hungry, so in early 2000s ADI developed a completely new way of isolating data, called iCoupler®.  iCoupler is a digital isolation technology which is a safe, reliable and easy-to-use alternative to optocouplers reducing cost, size, and power consumption with improved performance and reliability. iCouplers have been a resounding success, with three-and-a-half billion channels shipped since its introduction. Both the ADM2867E and ADM2561E feature iCoupler technology, not only protecting the integrity of data but also the equally vulnerable power supply for monitoring and control equipment. They also were designed to emit as little electromagnetic interference as possible, something the designers whimsically called their “Good Neighbor Policy.”

The ADM2867E (designed for high-speed, high voltage communication needs over distances under 100 meters) and the ADM2561E (for slower but longer distance communication - up to one kilometer) both qualify as “good neighbors.” These data communication products with isolated power supplies, ESD protection, low EMI, flexible power supply requirements and backwards compatibility for legacy systems are the right choice for designers of tomorrow’s industrial, instrumentation, healthcare, smart energy and smart buildings.