Before we get to the Christmas trees I would like to discuss a new draft standard IEC 63168. This standard comes in 4 parts across 174 pages and is entitled “Cooperative multiple systems in connected home environments”. The title doesn’t exactly jump off the page and there is no mention of functional safety but given that is the worst thing I am going to say about his standard it was good to get it out of the way early.

This standard is being sponsored by the IEC SyC AAL committee who cover assisted living. The standard has a large number of contributing experts with Japan in particular having a lot of experts on the working group. This is consistent with the fact that Japan with its aging population also leads in things like elderly care robots.

The picture below implies the standard is already available but anything else I can find suggests it is only at the committee draft stage. 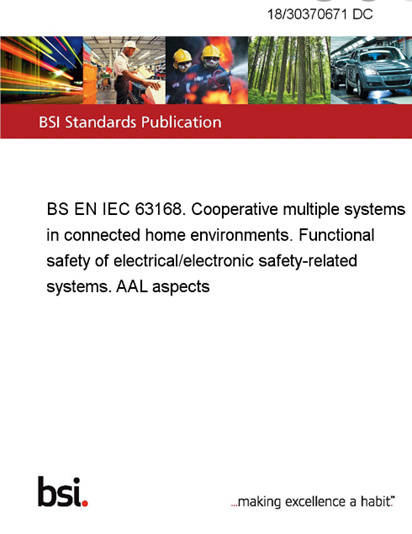 I believe you should always start reading a new standard with its scope. In this case the scope makes it clear that it covers “cooperative multiple systems that are operated together in a connected home environment” and emphasises that it “can be operated by “users, who may not be fully trained” and refers to IEC 61508.

The stated aim of the standard is to “reduce the occurrence of risk to a socially acceptable level” but it gives no numbers on that socially acceptable level. Instead of SIL or ASIL it uses the term H-SIL with the allowed dangerous failure rate of H-SIL B, C and D the same as those for the corresponding ASIL. I understand medical uses a different definition of risk to industrial (don’t ask as I don’t know the difference) and I wonder which one this standard uses given it has certain medical like applications.

There are lots of good insights in the standard including that walking in a dark place, even for somebody with poor leg control, might be low risk if the floor is flat but can be high risk if there are steps or stairs present. This is obvious once you think about it, but it is often no harm to spell out the obvious. Once again this reminds me of driving scenarios often considered in automotive which is not necessarily a bad thing.

The figure below represents what a safety function according to IEC 63168 would look like. They don’t use the language of sensor, logic, and actuator but I have added such labels below to tie it back to IEC 61508 and IEC 61511 which a lot of the readers are familiar with.

Figure 4 - an example system according to the standard

An obvious omission for me is that there is nothing on networking requirements but perhaps you just fall back to IEC 61508 for guidance and use a black channel safety concept according to IEC 61784-3. It might be interesting to compare home network requirements to those for an industrial environment as envisaged by IEC 61784-3 or IEC 62280 which is for rail.

I like this new standard. It is well written and more compact than either IEC 61508 or ISO 26262 and some of the topics in it are very nicely explained. If you can get your hands on a copy, then I recommend reading it. It will not be time wasted.

Now onto the safety of Christmas tree lights, I think we should start with a hazard analysis and risk assessment. This certainly isn’t a full one and I invite you to submit further material in the comments.

We could go the whole way here and propose a Christmas tree functional safety standard. After all there are standards for Irish coffee (Irish standard I.S. 417:1988 – see page 15 of here for more) and how to make a standard cup of tea (ISO 3103:1980 – see page 13 of here). In this new standard we could have a TSIL (tree SIL) to indicate the level of safety achieved.

Some of these “safety functions” are to prevent a risk and others to mitigate the risk. The difference might make a good topic for a future blog.

And of course, you could do something smart with an Arduino to control the lights.

I have also heard of people doing their own assisted living based on the existing home automation systems using just the presence sensors and the smart plugs and I think it has a lot of promise. One person had put a smart plug on the kettle and if the kettle, in an elderly relative’s house, hadn’t come on by 9AM they phoned or called around to check the person was ok given the deviation from their normal pattern of a cup of tea first thing in the morning.

Someone else had put a presence sensor in the bathroom and kitchen and if they didn’t detect a presence an alert was sent to a phone contact. I thought both were genius ideas with a very low risk of an invasion of privacy. The biggest expense might be installing good broadband but I believe some of the Smartthings apps can run locally on the hub without broadband but I haven’t tested it. The blog where I heard this compared it to the older technique from many years ago to looking out in the morning to see that the fire was lighting (smoke out of the chimney) of nearby elderly people. Same principle just using modern technology.