Take a look around: while you may not hear them due to their lack of a combustion engine, electric vehicles (EVs) are quietly taking up a larger share of the road. In fact, according to the World Economic Forum, 2.3 million electric vehicles were sold in 2020 — a 4x increase over EV sales just five years earlier. While touted as a green alternative to combustion engines and fossil fuels, EVs also have an Achilles heel: what to do with all those half-ton EV batteries when they’ve outlived their usefulness to power vehicles?

Today, EV battery recycling is the most common option, a process that recovers some, but not all, raw materials such as cobalt and lithium. But EV battery recycling is costly, unregulated, and lacks a clearly defined supply chain. Another solution gaining traction is reusing these batteries in what’s called “battery second life.”

Patrick Morgan, Vice President of Automotive for Analog Devices agrees that we’re at an inflection point for EV batteries. “In the next 5 years, there will be 5X as many EVs on the road as today,” he says. “Reusing and recycling the battery assets from EVs helps create a circular economy that saves energy and builds value for consumers.” 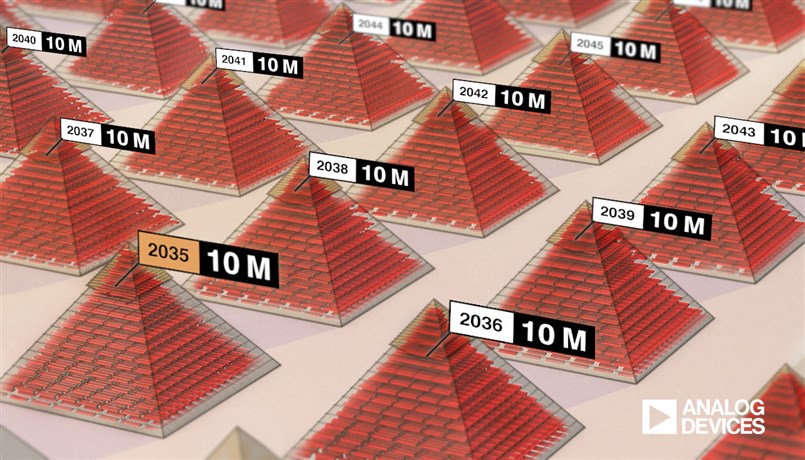 There are currently 10 million EVs on the road today. By 2025, there will be an estimated 10 million EVs sold every year.1 With the average life of an EV battery approximately 10 years, by 2035 the number of EV batteries discarded each year will be 1.3 – 1.5 times the mass of the Great Pyramid of Giza (5.8 million tons).2

All batteries are eventually broken down and recycled after being used and reused. Wireless BMS technology aids in rapid reuse or recycle decision making by using state-of-health data. This way buyers and sellers can build a standardized level of trust and fairly assess the battery’s value before arriving at a sale price.

Mike Kultgen, General Manager of Battery Management Systems at Analog Devices, says it makes sense to put time and effort into creating a high performing battery up front so it’ll pay dividends in the end.

“For EVs,the central element is of course, the battery,” he says. “Battery management systems (BMS) are critical to maximizing battery reliability and lifetime to ease EV adoption barriers. The better the BMS accuracy, the better you can understand the state of the battery cell, the more capacity you can extract out of it, thus, the more reliable the battery pack will operate.”

When a vehicle’s lithium-ion battery degrades to 70% to 80% of its original charge capacity — usually 8-10 years — it can no longer efficiently power the vehicle and needs to be replaced. The growing supply of these retired batteries is creating a new secondary market. The most direct path here lies in energy storage system (ESS) applications, where serviceable cells within a used battery pack can be re-purposed within a renewable energy grid to store excess power generated by wind, solar, hydroelectric or geothermal plants. EV batteries can also be disassembled into smaller battery modules for less demanding uses such as power tools, forklifts or electric scooters.

But this nascent second-life battery market is not without technology, quality-control and implementation hurdles. Today’s EV batteries, for example, use electrical harnesses that enable the monitoring of battery state-of-charge.These, and other harnesses, must be removed before the battery can be redeployed, which adds cost and design complexity. As part of a growing trend in product design that incorporates end-of-life disassembly, designers can expand upon hard-wired battery monitoring systems (BMS) with wireless BMS (wBMS) technology. Not only does wireless BMS reduce size, weight and material costs in electric vehicles, it enables the safer and more scalable process of robotic disassembly and assembly of battery packs.

“Removing the wire harness in wBMS opens up tons of possibilities that simply weren’t available with the prior constraints of a battery harness, says Roger Keen, General Manager of E-Mobility at Analog Devices.

The EV world is growing exponentially and batteries will play a key role in contributing to a more environmentally-friendly mode of transportation. While the second-life battery reuse sector is a high-value, intermediary step before recycling, its success is highly dependent on treating the battery’s initial and follow-on applications holistically. Battery and BMS design must be conducted with the entire useful life of the battery in mind.This may require a shift in mindset for battery suppliers and automotive manufacturers, but over the long term they can play an important role in creating an environmentally sustainable and economically viable new market channel.