Now that you're aware of the most common algorithms, we can dig a bit deeper into the modes of operation.

We’ve seen a general idea of how modern symmetric encryption algorithms transform blocks of plaintext data into ciphertext. Of course, the plaintext that we want to encrypt is rarely smaller than the 64- or 128-bit blocks that these algorithms process. The different possible approaches for how these algorithms could process inputs that are larger than the block size into ciphertext are referred to as modes of operation. The designer’s selected mode of operation has critical security implications. We will start by looking at the most “obvious” approach: simply concatenating the individual ciphertext blocks together.

By far the most natural approach for encrypting plaintext that is longer than the block size of the encryption algorithm is to encrypt the plaintext block-by-block, and concatenate the resulting ciphertext blocks:

Unfortunately, this is essentially always an insecure design choice.

To understand why, examine the image at right. On the left is the plaintext image, and on the right is the image encrypted using ECB mode. Clearly, quite a bit of information about the plaintext is revealed, even though the image has been encrypted. This is because ECB mode encrypts identical plaintext blocks into identical ciphertext blocks.

The counter mode of operation is quite similar to ECB mode, retaining all of its nice properties (for example, you can parallelize both encryption and decryption) but offering much better security properties.

Returning to the image example, we can see that encrypting the plaintext using counter mode no longer produces ciphertext that clearly leaks information.

There are many other modes of operation, each with strengths and weaknesses that are appropriate for different use cases. Always remember that the selection of the mode of operation is a critical decision with important security implications. 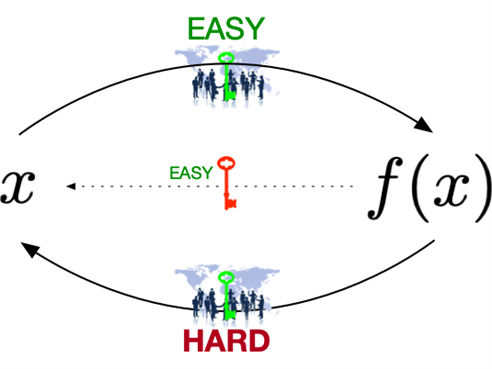 In our previous examples, Alice and Bob have both shared the same key – their information in the system was symmetric. In contrast, asymmetric encryption algorithms use two mathematically related keys: a private key known only to the owner, and a corresponding public key which the owner reveals to everyone. To encrypt a plaintext message, their public key is used. Only the owner is able to decrypt the ciphertext, as only they possess the private key that corresponds to their public key. 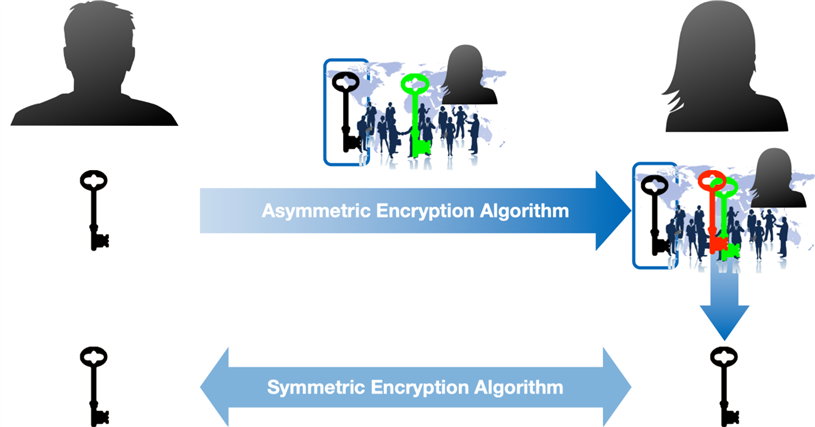 Since symmetric and asymmetric encryption algorithms rely on different types of hard problems to provide security, they are vulnerable to different attacks that target their underlying mathematical framework. Consequently, they require different key lengths to provide the same equivalent security level. This table summarizes the number of key bits required for various constructions to provide an equivalent brute-force security strength. Note that DES is unable to provide the minimum 128-bit brute-force security, and as such it should not be used.