PFL stands for power and force limiting. PFL is one of the ways robots can work collaboratively and become cobots (collaborative robots). The essence of PFL is that even if the robot and human come into contact the human should be unharmed. Of course, just buying a suitable robot is not enough – if the robot is holding a hypodermic needle and pokes you in the eye then no amount of PFL will save you. Therefore, a robot designed for PFL is a necessary but not sufficient condition for a collaborative PFL application.

Let’s “backup the bus” and go back to the beginning. The priorities for safety are to eliminate the hazard (inherently safe design measures) or if that can’t be done, use a safety function (safeguarding). If a safety function can’t sufficiently reduce the risk, then the last option is “warn and inform”.  There are more comprehensive versions of the below graphic in the standards (see for instance RIA TR R15.306-2016) but generally relying on people to read the warnings or wear special safety gear or tracking devices are at the bottom end of the hierarchy. “I only ducked in for 1 minute to get my phone” type excuses are often heard but still sometimes safety goggles and gloves are necessary if none of the other options are viable. 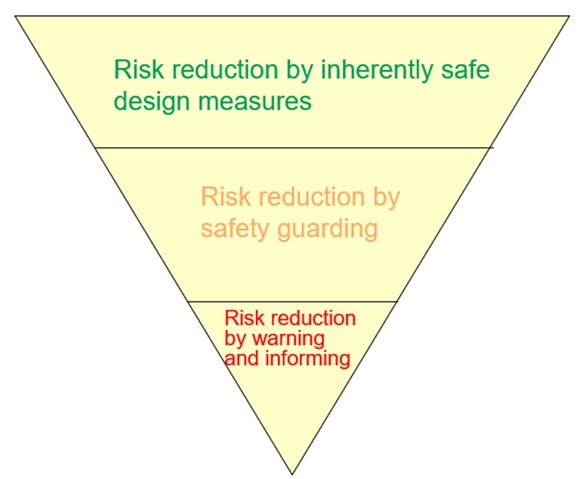 Unfortunately, while these are usually helpful, they are not sufficient and that’s where PFL comes in and this is where it gets interesting. Normally functional safety is about avoiding harm e.g., crushed fingers or a broken arm or even death. So how hard can a robot impact be before it causes harm. Is it acceptable to be hit 100 times a day but only in a minor way? Do 100 tiny impacts equate to one really good push? ISO TS 15066 gives some guidance on this to aid the guidance already in the robot safety standard ISO 10218:2011 and uses pain as a threshold instead of harm. I certainly want to avoid harm but I’m not keen on pain either so personally, I am happy the standards use pain instead of just harm as a metric. 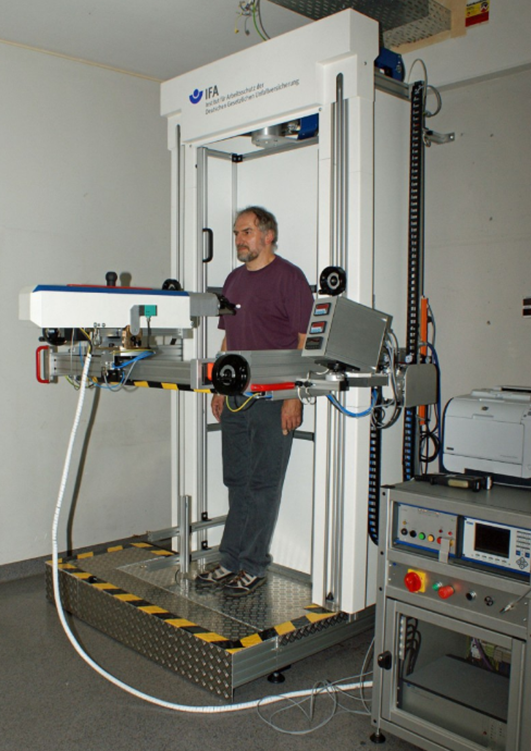 ISO TS 15066 then gives limits at various body locations, around 30 in total.  Despite what it shows in the picture above I believe the volunteers were blindfolded and had ear plugs so they didn’t know when an impact was coming.

Two types of impact are considered transient (no clamping – happens in free air) and quasi-static (clamping) and limits given for both. The term transient is used because the forces involved reach a peak and then rapidly fall back towards zero when no trapping is involved and for the quasi-static case the forces and pressures will rise and then when the body part is clamped typically stay at that high level until you free your hand.

The standard seems somewhat contradictory on contact with the head saying it must be prevented but still giving limits. If contact with the eyes is possible regardless of the forces, it would be hard to argue against the use of safety goggles or similar. Yet I do see videos on YouTube which seem to feature cobots working in PFL mode on a desk with people sitting there alongside them. To me, contact with the head of the operator looks entirely unprevented.

I have seen other articles stating that the weakest bone in the human head is the Nasal bone with a fracture force of 342N and quoting 337N as the fracture force of the thyroid and cricoid cartilages in the neck.

The typical requirement for safety functions related to PFL are PL d CAT 3 even if I hate to see a category mandated.

Compared to SSM which I discussed in a previous blog cobots using PFL typically move a lot slower, this is because power and force have a square law relationship with speed (doubling the speed quadruples the forces). Therefore, reducing the speed is a key method to limit the power and forces during an impact. The measurement and limitation of that speed is a safety function itself and must meet or exceed the SIL or PL claimed for the PFL mode. A robot is free to use SSM (speed and separation monitoring – see my recent blog on the topic here) while nobody is near and then switch to a PFL mode when someone is close by. Such a combination can give the maximum productivity. However, be warned it might sometimes be more productive just to keep the robot in a cage.

A verification method for power limited collaborative applications is given in RIA R15.806 (I am unsure if this is the same as ISO PAS 5672). A minimum resolution of 1N is required and a bandwidth to 1KHz. There are videos on YouTube, that appear to show robots exceeding these limits.

Final warning – no matter the features built into the robot/cobot the application determines everything. If the robot is holding a knife or juggling dynamite PFL is not sufficient to save you and you need a different form of safety (a perhaps a different workplace).

The standard for AGV/AMR/IMR and other mobile robots doesn’t have such limits, but it would seem logical to apply the same limits, focusing perhaps on the shins and lower legs, if they can collide with a person.

ISO 13482 the standard for personal care robots also talks about limits which shows that the requirements extend outside industrial robotics.

I have also seen a draft of a new standard, ISO /DIS 21260 entitled “Safety of machinery – mechanical safety data for physical contacts between moving machinery or moving parts of machinery and persons” which defers to ISO 13849-1 or IEC 62061 for the sensors and control systems that limit contact conditions. This standard also contains a nice example in Annex C for a domestic AGV.

I learned my functional safety on accelerometers and an obvious question is if accelerometers could be useful in this area. As an example, see here for ADXL195 datasheet. The question then becomes, can you tell how hard you have hit something (really how hard you are decelerating) or even just if you have hit something in time to stop and possibly reverse. This automotive targeted part can also measure the noise of any deformation in a bumper (which might work better in a car) before deceleration has even started. If I remember correctly the response time was 2ms with the airbag deployment needed to have completed within 30ms. For a mobot travelling at < 5km, 30ms is a generous amount of time and 2ms represents a forward movement of 2.7mm. Interestingly sensors such as this are mounted in cars at a 45-degree angle to the front of the car. Therefore, a full-frontal collision should cause the X axis to respond positively and the Y axis to respond negatively but by the same amount. In this way, you can tell the direction from which the impact occurred and deploy the airbags. For a mobot, I guess you would stop moving or reverse. For very tall robots I believe this should also work if the collision is with an overhead shelf that was not detected by a laser scanner near ground level.

The latest draft of ISO 5672 gives some good examples of where inadvertent impacts can occur including:

All these seem entirely plausible and indeed human nature makes them hard to avoid and so a safety function is required.

The full set of blogs in this series are available here.

One recent blog covered another collaborative mode of operation, SSM here and another one covered the robot stopping functions which are also relevant to PFL.

The Analog Devices robotics page is available here where you will find lots of interesting products for your next robot design.