His name was Onesimus. At least, that was the name by which he became known to the people of Boston. We don’t know the name his parents gave him because when he was just eleven years old he was taken by force from his West African village and put aboard a British frigate bound for Boston. There, he became the property of a man named Cotton Mather. Mather was a minister and the leader of the First Church of Boston, and he is the one who gave his slave the name by which we know him today.*

The Boston to which Onesimus was taken in the late 1600s was a tightly knit, religiously intolerant community. Calling it “intolerant” is not hyperbole. Over the years the town had banished dissenters from the prevailing brand of rigid Puritanism, publicly whipped Baptists and hung Quakers. (But slavery was okay.) Boston, with its natural harbor, was soon part of the notorious Triangle trade of slaves, sugar, and rum. If hangings and slavery weren’t enough of a draw for settlers, there were also regular epidemics of smallpox. Six times between 1630 and 1721 the virus had spread through town, killing hundreds. The worst was yet to come. 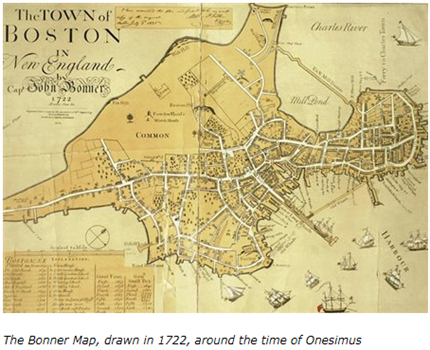 On April 21, 1721 a British ship docked at Boston’s Long Wharf. On board was a sailor with a rash about his mouth and throat - the early symptoms of smallpox. He was quarantined, but it was too late. Infected sailors had already begun their shore leave. By late 1722, when the epidemic finally ended, over half the population of 11,000 had been infected and over 800 had died. (Another 900 residents had fled the city in panic. All they managed to do was spread the virus to other parts of New England.)

How many of us, when confronted with a seemingly intractable engineering problem, have been told to “think outside the box?” I bring this up because Mather was neither a scientist nor an engineer. He didn’t even have a medical degree. (All but one Boston doctor was similarly without one.) So what we have is a prominent and influential member of the same Boston ruling class which had, over the years, banished, whipped, and hung dissenters of the town’s religious orthodoxy. Mather himself was a prominent prosecutor and judge in the infamous Salem witch trials of 1692 and 1693, which resulted in the execution of 20 people. Which makes Mather’s thinking outside the confines of the ecclesiastical box in this situation even more remarkable.

As the 1721-1722 smallpox epidemic began, Onesimus went to his master with a story. According to a paper posted on Harvard University’s Science in the News website, Mather later wrote of the conversation. Onesimus “…told me that he had undergone the operation which had given something of the smallpox and would forever preserve him from it, adding that was often used in West Africa.’’

Let’s try to put ourselves in Reverend Mather’s shoes. He was being asked to believe prevention was possible by voluntarily being infected with the disease. And the person telling him this outlandish tale is a man whom he has enslaved. There was every reason for Reverend Mather to reject Onesimus’ story outright. But he didn’t. He sought out other slaves from West Africa and they told him the same story. Pox, collected from infected villagers, would be placed inside a cut made on the arm of a healthy person. The healthy person would get a mild form of the smallpox but recover. When the next epidemic struck, almost all of those who had previously been infected, lived, while hundreds of others succumbed.

Except for one physician, Zabdiel Boylston, doctors in Boston were vociferously against the idea. This, despite Mather backing up the slaves’ anecdotal story with published reports of a similar method being used in Turkey and elsewhere. But the other doctors held their ground. It’s hard to blame them entirely. After all, no one knew the effects of inoculation on the population. What Mather and Boylston were proposing was nothing less than a medical “Hail Mary” play. 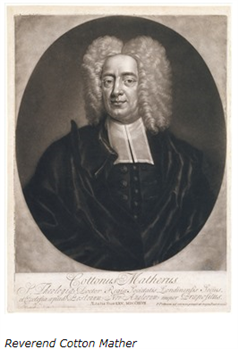 Despite the prevailing doubt and fear by the medical community Mather doubled-down on inoculation by going directly to the people. Week after week, from his pulpit, he preached the life-saving benefit of inoculation. Many congregants in the packed church were not swayed. They believed inoculation to be against God’s will. One congregant expressed his feelings with a bomb thrown into the Reverend’s home. Attached was a note. “Cotton Mather, you dog, dam you! I’ll inoculate you with this; with a pox to you.’’ Thankfully the bomb did not explode.

Undeterred by the threat of violence Mather’s one medical ally, Dr. Boylston, would inoculate almost 300 people, including his own son, Thomas (a brave act on the doctor’s part.) When the epidemic ended in 1722 almost one in six untreated Bostonians were dead from the disease, but only one in fifty who were inoculated perished. Thomas, Reverend Mather, and Dr. Boylston were among the inoculated who survived. Building on this and other successes Englishman Edward Jenner would later discover a safe and reliable method of vaccination. In 1980 this dread disease was declared eradicated by the World Health Organization.

Onesimus’ race was not believed to be equal, according to his white enslavers. Yet Mather believed his story. It could not have been just desperation. Mather also had to have faith in Onesimus as a man. A man who, Mather might have realized, was equal because Onesimus faced mortal danger from the disease. Consider, too, the even more impressive act of humanity by Onesimus. He could have watched as hundreds of his race’s enslavers perished. Instead, he gave them hope. Onesimus saved their lives. Later, in a final act of humanity (and perhaps, gratitude) Mather granted Onesimus his freedom.

With riots in Pakistan over administration of the Polio vaccine and the re-emergence of once-eradicated Measles in the United States the story of Onesimus is timely. Ignorance, misinformation and fear in colonial Boston is easily explained. There simply wasn’t enough knowledge about the procedure and its efficacy to justify the risk. Today, with almost three centuries of knowledge and experience it’s not so easily explained away. Today, more than ever, we need more people to use their Engineering Mind.

* Mather’s choice for a name for his slave was not without irony or, as we will learn, some prescience. In the New Testament’s Epistle of Paul to Philemon we read Paul’s friend, Philemon, had a slave named Onesimus. (In ancient Greek the word onesimus means “useful” and “profitable.”) According to the Epistle, Onesimus escaped bondage and fled to Rome. There he met Paul, who was imprisoned at the time. In the Epistle, Paul converts Onesimus and returns him to his friend “no longer as a slave, but better than a slave, as a dear brother.”