Every workday over 250,000 vehicles jam Route 128 here in Eastern Massachusetts. That is way beyond its designed capacity, with the resulting traffic jams raising the tempers of commuters along with the temperatures of their engines. To accommodate growing demands the highway has been widened several times. All that did was make the traffic jams wider. North of Boston, the intersection of Route 128 and Route 93 has become one of the busiest in the country. According to the Mass Highway Department up to 400,000 vehicles move through this one cloverleaf every day. Not bad for a highway once derided as a “road to nowhere.”

"The road to nowhere" is what many called the four-lane highway proposed in 1934 by Public Works Commissioner William F. Callahan, which was to be part of his grand plan for the region. Callahan envisioned a “spoke-and-wheel” system consisting of a circumferential highway around Boston, connecting to highways radiating north, west, and south of the city. It was an audacious proposal given the dire economic conditions brought on by the Great Depression. Rising unemployment had caused tax revenue to drop like a stone, and legislators were wary of funding such a big project. Ironically enough, the Great Depression would actually help Callahan finally get approval when, under the banner of recovery, the federal government offered $1 million to help fund construction of the road.

Callahan decided to start with the wheel of the system, a semi-circumferential highway about fifteen miles outside the city. To mitigate the NIMBY factor (Not In My BackYard) in communities along the path of the proposed road, Callahan cleverly selected a route avoiding town centers. While this led to the derisive “road to nowhere” appellation, it made it easier to obtain zoning permits, and also reduced the cost of land-taking.

There was one small hiccup. Callahan believed the highway should be six lanes wide to support traffic generated by new businesses, along with the housing, schools, and other support services required by their workers. But even with the Feds financial support the state would not give him the money for more than four lanes. Utterly convinced the highway would bring prosperity and increased use of the road, the DPW commissioner had designers add sidewalks into the plans. 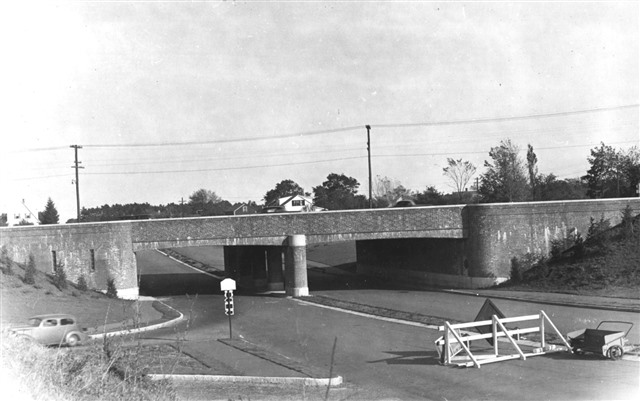 It is 1937 at the intersection of the new Route 128 and Route 1 in Lynn, Massachusetts, showing the sidewalks mandated by Callahan.

Construction on the highway began north of the city in 1936, albeit slowly. Only a few miles of the road had been completed by 1939 when newly elected Governor Leverett Saltonstall removed Callahan from his post. A few Callahan allies in the Legislature found money to extend the highway a few more miles, but by then it was late 1941, when US entry into the war stopped all work on the highway.

After the war, politics and a revitalized economy combined to resuscitate the highway. In 1949 William Callahan was reinstated as commissioner of the DPW by the newly elected governor, Paul Dever. Post-war prosperity, cheap gas, the lure of the suburban dream - and the promise of quick commutes on gleaming new highways - made funding a much easier sell. Massachusetts’ legislature approved $400 million in highway bonds between 1949 and 1952. Over the course of the next decade Route 128 would be extended and by 1959 was one continuous road from Gloucester down to Braintree. 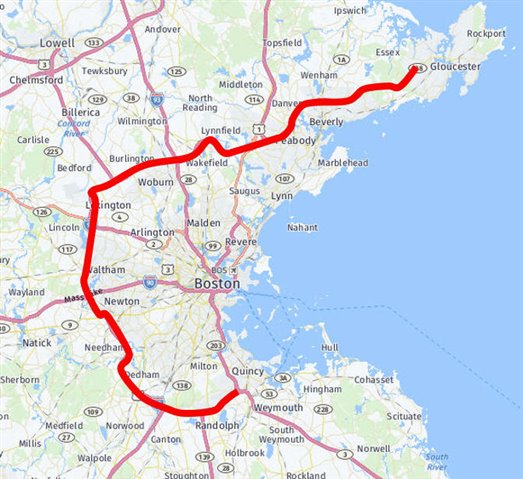 Callahan had predicted prosperity along the highway, but even he was surprised at the region’s phenomenal growth. In 1955 there were 53 “commercial enterprises” located around Route 128. In just four years the number more than quadrupled to 226.  By 1967, a mere eight years after the highway was completed, there were 729 businesses along the highway employing over 66,000 people – a figure which doesn’t include workers in government-run offices and facilities.

Not to take anything away from Callahan’s dogged determination to get the highway built, but this explosive growth did not happen organically. This 60-mile-long belt of concrete around Boston could be considered the fuel for growth, but fuel still needs a spark to start burning. The spark came from a man named Gerald Blakeley.

It was 1950 and Blakeley had just started work at the real estate development firm of Cabot, Cabot, and Forbes. As Blakeley later told the story, he had been studying a map of the road network around Boston (Callahan’s “spoke and wheel” system) and one night he woke with a vision, a plan for a new kind of office park - accent on the park. The website for Blakeley’s development firm (one he started after leaving CC&F) explains: “His vision to integrate development with the natural environment led to the concept of landscaped office and industrial parks, allowing for the creation of a park-like atmosphere with lawns, trees and attractive overall landscaping.”

So, we built it, and they came. Hundreds of companies, like Analog Devices, built offices, factories and distribution centers near Route 128. ADI’s beautifully landscaped, campus-like, Wilmington location is a testimony to Blakeley’s vision. *

Growth begat more growth. Three mammoth shopping malls in Braintree, Burlington, and Peabody (along with hundreds of strip malls dotting the landscape) vie for our shopping and leisure dollars. Growth also begat challenges. Even before it was completed Route 128 was widened from four lanes to six, then later to eight. As the cost of land near Route 128 skyrocketed another semi-circumfrential highway, Route 495, was being built fifteen miles outside 128. Once sparsely traveled, Route 495 now shares many of the same capacity issues as Route 128. Over the decades housing developments have sprung up like weeds as towns shudder under the burden of supplying services such as police, fire, water, sewer, and schools. Revered by many as catalysts for the region’s prosperity the highways continued to get widened and their interchanges got bigger. Only these wider roads and interchanges don’t handle the load any better. Wider roads have only produced wider traffic jams. 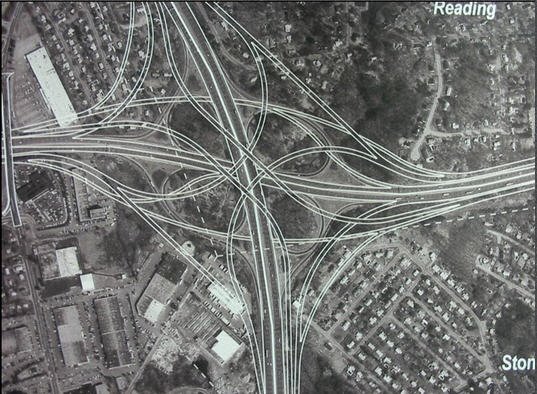 It’s not just Boston finding itself at a crossroad (no pun intended.) Seattle, Austin and San Jose are just a few other cities with crushing commutes. The fix, some believe, lay outside the paradigm of strips of concrete. It could be autonomous and electric vehicles. Maybe relief will come in the form of efficient and economic mass transit. Or perhaps the advent of 5G will accelerate the effectiveness and acceptance of telecommuting as a viable alternative to driving into the office.

It’s possible sitting in one of Gerald Blakeley’s campus-inspired business parks are people whose “Engineering Minds” will bring forth ideas yet to be conjured. Those who suffer the daily grind of long, bumper-to-bumper commutes certainly hope we can avoid a highway-based version of Charlie on the MTA, with no way to get off Bill Callahan’s “road to nowhere.”

For more pictures, stories and even a movie, please visit the Building Route 128 website

* Vision, if I may borrow a line from baseball manager Earl Weaver (who said "momentum is only as good as tomorrow's pitcher") is only as good as tomorrow’s ideas. As I write this blog, right outside my office here at the Analog Devices Wilmington campus two new buildings and a parking garage are being constructed. Blakeley’s campus concept is still very much alive, albeit with several 21st century twists, notably the goal for a net-zero energy campus. Plans for the garage also include a number of electric car charging stations and a one-megawatt solar array on top.