The year is 1880 and Thomas Edison was several years into his quest to perfect an incandescent light bulb. It was important to him the bulb produce a light which was both bright and safe, qualities not found in lighting solutions of the day. It was equally critical the price be low enough for the average citizen to afford, yet high enough to cover the cost of building an electric distribution system from scratch.

Edison learned hard lessons about earning a living as an inventor early. As I explained in a previous blog one of Edison’s first patented inventions, an automatic vote counter, didn’t sell. He then watched helplessly as the stock ticker which he, out of no small amount of financial desperation, had sold the rights for $40,000, went on to earn its’ new owner millions. After these and other lessons he was alleged to have vowed never to invent anything he wasn’t sure he could sell.

Edison used the sale of the stock ticker to build a fully stocked laboratory in Menlo Park, New Jersey and hire mechanics, craftsmen and engineers with inquisitive minds to build devices that would change the world. But on this night, Thomas Edison was puzzled. Based on every known law of physics what he was seeing inside his incandescent light bulb was impossible.

A few days earlier he saw, with much frustration, that after a few hours the carbonized (pre-burnt) bamboo filament inside his bulb was leaving an unsightly carbon deposit inside the bulb. He also noted that the filament wasn’t burning evenly – it was darker at the end closest to the positive terminal of the battery powering the bulb. He wrote the observation in his notebook, and then quickly moved on - it was more important was eliminating those ugly carbon deposits. He tried several things before adding a metal plate inside the filament which, in a later photograph taken of a similar bulb, looks like a paperclip. 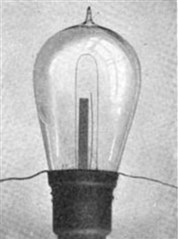 The metal plate didn’t help with the deposits of carbon inside the bulb. However, Edison did notice something else. If the metal plate was made positive with respect to the filament his galvanometer (an early current measuring device) showed a flow of current. But, if the leads to the metal plate were reversed and the plate made negative with respect to the filament, his galvanometer registered zero and the bulb didn’t light anymore. Further testing and measurement showed that the more positive the plate, the higher the current. He could control the flow of current through the bulb - even shutting it off at will, depending on the polarity (plus or minus) of the plate.

Hunkered down in his lab he eventually figured out the carbon problem and would, with great fanfare, introduce to the world a safe way to light our homes, offices, and factories. Later, he would bring music into our homes and then show us a world in motion with moving pictures. After his stunning success with the elusive electric light, Edison basked in the public’s adulation. They even nicknamed him “The Wizard of Menlo Park.” But what can we make of his almost casual dismissal of the ability to control current flow inside the bulb, or the even greater mystery of how current was flowing without a wired connection? Was he too focused on getting his light to market to consider the implications? Did the “Wizard” suddenly get a cramp in his vision muscle?

As it turns out, Edison was not the first to observe how super-hot metal could produce a flow of electrons. French physicist Edmond Becquerel wrote about it back in 1853, and over the years other scientists and physicists made similar observations. They came to call it Thermionic Emission. None had the audacity - or were so opportunistic - to name the effect after themselves. The Wizard did not suffer from the same lack of hubris - he called it the “Edison Effect.” We know Edison made some effort to find a practical use for “his” effect, taking precious time away from his work on the light bulb to file a patent its use as a voltage regulating device. U.S. patent 307,031 (you can see it here) has the distinction of being the first US patent for an electronic device.)

This part of the story begins at the International Electrical Exposition in 1884, where Edison had rigged up a demonstration of his special bulbs to automatically set off a telegraph sounder. The demonstration caught the eye of William Preece, a visiting British scientist, who brought several Edison Effect bulbs back home to England where the bulbs - and the effect - were the subject of much discussion. Physicist Owen Richardson started researching the phenomenon in 1897 and it was he who coined the more scientific term “thermionic emission” for the effect. Thirty years later he would receive the Nobel Prize in Physics for this work.

John Fleming was another British physicist who ultimately produced several game-changers in the field of electronics. Fleming has an interesting backstory - he had once worked as an electrician for Edison’s company in the UK before he became one of the world’s first professors of electronics in 1884. His expertise with electrical power systems was so well known in 1899 Guglielmo Marconi hired him to the build a 25kW spark gap transmitter on the western coast of England. In 1901 Fleming’s transmitter was - allegedly, some say - heard sending the letter “S” in Morse Code on the other side of the Atlantic in St. John’s, Newfoundland. Marconi next assigned Fleming the task of improving radio reception, at the time all Spark Gap. (Spark Gap was, with all due respect, really nothing more than sending bursts of electro-mechanically created static in Morse Code. Spark Gap receivers were also electro-mechanical devices known as “coherers,” basically a tube with iron filings between two electrodes which responded to the electromagnetic signal created by the transmitter.) In 1904 Fleming, using the principle of the Edison effect, built the first vacuum tube radio wave detector, known technically as a two-electrode diode. This tube is widely considered to be the beginning of modern electronics. Fleming’s tube greatly improved the ability to pick up weaker spark gap stations, but its use extended far beyond the spark gap era. Even as late as the 1970s, before the advent of reliable high-power semiconductors, radar and other receivers were still being designed with Fleming’s device.

In 1906 American Lee DeForest added a third wire between the cathode and plate of Fleming’s diode which, depending on the voltage applied to it, controlled the flow of current between the cathode and the plate. Called a control grid, it enabled the amplification of electronic signals, the foundational invention needed to kick-start long-distance telephone, radio, radar, and some of the first computers. With the exception of H.G. Wells or Jules Verne who could imagine those tech marvels being a daily part of our lives? Which is why I tend give 1886 Edison a break. What he did not see was, in all fairness, what few people could – an unprecedented revolution in electronics made possible with that strange effect.