This is the story of a $4 billion omelet. Only this one is not made of eggs, vegetables and cheese, but steel, concrete and massive amounts of innovation. The Engineering Mind has possibly never worked harder.

Our story begins in the 1970s when Boston faced several hard truths about the elevated road built through the center of the city two decades earlier. Known as the Central Artery the six-lane highway was designed during the Truman administration for 75,000 vehicles a day. By the time Gerald Ford took office the daily average had risen to over 150,000. After years of use, the structure had become a rusting eyesore as well as a barrier between Boston’s downtown and waterfront. Funding for the tunnel to replace this main section of the highway was approved in 1983. The construction plan included a promise (etched in the funding document) that proved very expensive to keep. Not a single home, business, lane of traffic or train track could be taken, even temporarily.

One of the tasks for highway designers south of Boston was to extend the Massachusetts Turnpike (which, at the time, stopped at Interstate 93) to Logan Airport, across Boston Harbor. The Massachusetts Turnpike had been extended in the 1960s from the west to I-93, also known as the Southeast Expressway (a.k.a. the “Distressway” due to its never-ending traffic jams.) Built along a railroad right-of-way, the six-lane turnpike ran below street level once it reached Boston. There was no roof, which also saved money on the design, construction and maintenance of a ventilation system. Highway engineers call that a boat section. 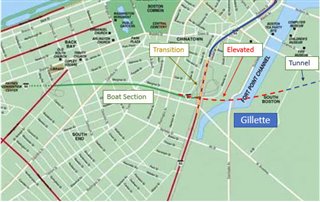 In the original plan (from which an initial project-wide cost estimate of $2.3 billion was made) the turnpike would rise up from the boat section to pass over the Southeast Expressway and Fort Point Channel, then dip back down into a tunnel before travelling under Boston Harbor to Logan Airport. This plan carried two benefits. The first was that the Southeast Expressway already had to slope downward to connect to the new underground central artery. The second had to do with a 90-year-old subway tunnel that runs down the middle of the Fort Point Channel. So this plan made sense as it would be much easier to raise the turnpike from the boat section to go up and over I-93 and the channel.

Gillette, one of the state’s largest employers, had long had its “World Shaving Headquarters” on the eastern side of the channel. And that I-90 bridge would cross over a corner of Gillette’s property, taking away land needed for employee parking. This, in a city already infamous for its frustrating lack of parking spaces. There were also stories, never officially confirmed, of Gillette executives furious that an elevated highway would block their stunning view of downtown Boston. The irony that a project whose primary goal was to put the Artery underground downtown would result in an elevated eyesore somewhere else in the city was not lost on them or on a growing chorus of critics.

I spent three and a half years at the project as a spokesperson and writer (still have my hardhat.) On my very first day I came across a word that I had never heard before: Mitigation. I had to look it up. It means “to make less painful.” Mitigation was at the root of many of the project’s design and construction decisions. After several urban renewal debacles in Boston during the 1950s and early 1960s (most notably the destruction of the old West End neighborhood) communities and neighborhoods gained the clout needed to impose restrictions on construction projects. No longer could someone show up at your home telling you a highway was going to be built through your living room. In fact, one of the fundamental rules for the central artery tunnel job was that not a single home or business could be taken. Nor could any lane of roadway or train track be removed, even temporarily. Those had to be mitigated with replacement lanes or tracks.

The state heard loud and clear that one of its largest taxpayers was not happy, so designers were instructed to flip the two roads, meaning the turnpike would now go under the expressway. This meant the Turnpike would now be under the Fort Point Channel. This is what sets up a series of challenges – I liken them to dominos – that fell once construction began. 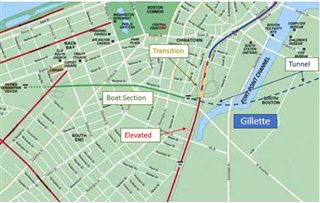 Located across Fort Point Channel from Gillette is South Station. Opened in 1899 it was, by 1913, the busiest in the country. During the Second World War over 125,000 passengers a day got on or off trains berthed on one of the station’s thirty tracks. Though by the 1990s it had just eight rail lines, there were still over 400 trips a day on those tracks carrying thousands of passengers west and south of the city. Remember that commitment not to take any rail lines out of service? The three tunnels needed for the turnpike and the ramps connecting it to the Southeast Expressway could only go one place - directly underneath those tracks.

To keep the trains running while installing highway tunnel sections, construction engineers turned to a procedure known as Tunnel Jacking. Tunnel Jacking evolved from a long-used method to push pipes (underground, using high-powered hydraulic jacks) between trenches dug on either side of roadbeds, sidewalks, and train tracks. As Steve Taylor, Derek Penrice and Hatch MacDonald explained in their 2002 AREMA conference paper on the implementation of Tunnel Jacking here in Boston, “The tunnel sections represent the largest, most complex tunnels ever to be installed using jacking methods. At 80 ft wide by 40 ft high, the typical tunnel cross-section is ten times larger than previously attempted within the United States. The tunnel sections, which are up to 370 ft in length, pass just a few feet beneath eight operational rail-tracks.” But it wasn’t the size of the tunnels that presented the biggest challenge, it was the soil around and under the tracks.

One of the initial steps in highway construction is to test the weight-bearing capacity of the surrounding soil. With this information contractors who want to bid on the job can accurately estimate the cost of executing the job. To stabilize poor load-bearing soil the usual solution is to employ Grout Mixing so tunnel sections, overpasses, and roadways can be built in otherwise weak ground. (This grout is a distant relative of the stuff between your bathroom or kitchen tiles. However, as dramatically demonstrated in this video, the equipment that injects it into the ground is a lot larger and more expensive.) 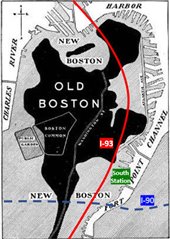 In my piece on the filling in of Boston’s Back Bay I explain how parts of the city, including the area around the Fort Point Channel, were built on landfill in the 1800s. So, as a design engineer on the project once said to me “the soil around the Fort Point Channel has the consistency of week-old tapioca.” (Just a quick aside - we PR folks love quotes like this.) One simply cannot jack huge tunnel sections through week-old tapioca. The soil needed to be stiffened.

Complicating the job was the labyrinth of ramps, roads, and tracks behind South Station, all of which would have to shift location to allow for construction of the new I-90/I-93 interchange. There simply wasn’t enough room for the massive grout mixing machines required for the job.

The answer was in another clever solution from the project’s engineering minds, as explained by Taylor, Penrice and MacDonald in their paper: "A ground freezing program was developed to improve the in-situ stability of the existing soils. An array of approximately 1,800 freeze pipes, spaced at 5-6 ft centers was developed, to encapsulate the soil mass through which the tunnels would be jacked. The 4-½-inch diameter steel freeze pipes were vibrated into the soils and interconnected to a compact refrigeration plant located on site. Brine at a temperature of -20° C was pumped through main feed lines to the freeze pipes. The chilled fluid froze the groundwater in the soils over a period of 5-6 months, effectively turning the ground into a giant ice cube."

This makes it sound easier than it was, because engineers also had to account for the expansion of water when it freezes, potentially (but not uniformly) causing a “heave” in places where the ground was especially wet. With careful monitoring and “on the fly” adjusting the ground was frozen and jacking of the tunnels could begin. (For those of us who like big numbers, the ones associated with the hydraulic jacks are impressive: “Each jack was capable of generating a working load of 500 tons, and an ultimate load of 1,000 tons. As approximately 30 jacks were grouped at each jacking station, the total jacking force available at any one time was 30,000 tons.”)

Here's a great diagram of the operation showing, on the left, the hydraulic jacks that pushed the tunnel section forward. We can also see the conveyer belt tasked with carrying the excavated dirt away. Below the diagram is a photo taken during construction. Note the train running blithely over the operation as if nothing was going on below... 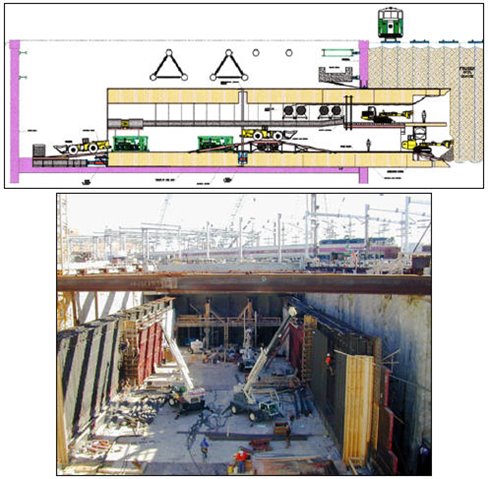 The original cost estimate was $400 million for the Massachusetts Turnpike/Southeast Expressway interchange. This included the crossing of the turnpike over the Southeast expressway and the Fort Point Channel as well as the tunnel to the harbor tunnel to Logan Airport (later named for baseball great Ted Williams - I’ll tell you about the day I met the “Splendid Splinter” and other Hall of Fame greats another time.) The $400 million just about covered the jacking of three tunnels under those railroad tracks.

I titled this piece “The $4 Billion Omelet.” When I was at the project in the mid-1990s a design engineer once described the interchange between the Expressway and the Turnpike to me as an omelet. “Normally,” he said, “two intersecting highways are connected with a cloverleaf. But [as we see in the map below, of the final design] we have South Station to the northeast, the Red Line subway service yard on our southeast, the South End to the southwest and Chinatown to the northwest. There’s no room for a traditional four-sided cloverleaf so the interchange has to be folded over, three times, like an omelet, to fit into one quadrant.”

That sound you’re hearing is that of the cash register ringing. Putting the Turnpike into the tunnel required a series of innovations just to get under the railroad tracks. Mitigation and innovation aren’t cheap, as we have seen and will see even more in Part II of the story of The $4 Billion Omelet. Join me then. We still have $3.6 billion to go… 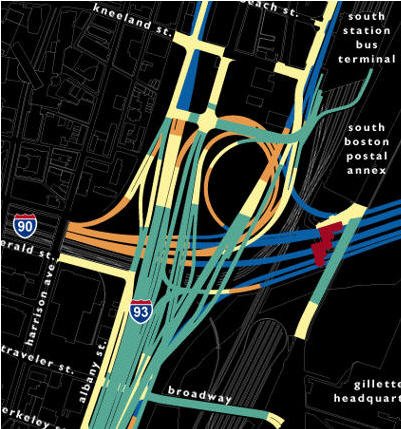