Sometimes, the Engineering Mind wanders. The body, having little choice in the matter, follows. All of us who work at a computer know that when you are “heads down” most of the day, looking up can be a revelation. You notice things. We here at the EngineerZone office in Wilmington, Massachusetts recently heard this story from one of our colleagues, an engineer who wandered, looked up and discovered: 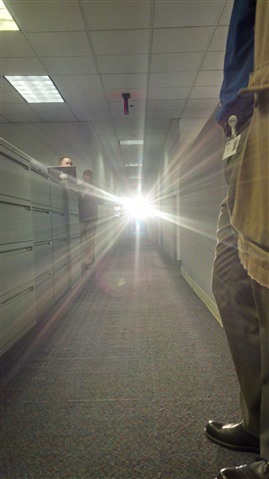 Sometime mid to late October, around the 18th to the 21st, between 4:30 and 5:30 in the evening, the sun will set beyond the horizon directly out the lobby window of building 1. Just before it dips below the horizon, for a minute or two, the sunlight will actually shine directly down the long corridor towards the middle of the building and shine on the far wall. I’m not sure if that was the intention when the building was put up, but the effect is quite interesting.

He shared his discovery with several of his colleagues, one of whom gave the phenomenon a name: Statahenge, an homage to the founder of our company, Ray Stata and to the world-famous circle of rocks in southern England that can predict some celestial phenomenon. That the alignment of sun and hallway just happens to occur in the building named for Mr. Stata makes the name even more appropriate.

It doesn’t predict eclipses, seasons, or the phases of the moon like its namesake in England, but I’m pretty sure after this blog gets posted we will have a crowd at Statahenge this October…