In this blog series we have talked to teams about their FIRST Robotics season, the struggles they have faced, and the experience they’ve gained through being apart of their school’s FIRST Robotics teams.  The FIRST Robotics World Championship events are taking place in Detroit, with over 40,000 students participating at Worlds, this year’s championship events are sure to be a great one. As this year’s season wraps up we’d like to leave you with a final update with the team’s we have been covering.

One team that we have been sponsoring this season is a team that was founded in 2006, the Westwood Robotics Team 1757: Wolverines. In 2017, this team was invited to attend the World Championships and was ranked in the top 40 out of the 200 teams based out of New England. The team’s success took Westwood, Massachusetts by storm. Since then the team has faced immense challenges, the Championships team was comprised of mostly high school seniors and when they graduated, it left the team with just two remaining members. Those two students jumped into action starting their recruiting process early and had tremendous success adding 43 new members. Since then, the team has been working hard to get back to the Championship level they know they are capable of and are now up to 58 team members. 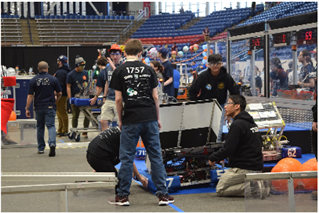 This season the Westwood Robotics team has finished competing, they placed 21st out of 40 at the New England District Competition and competed in the playoffs. Before the next season starts they are going to explore other robots and plan on implementing a mini-course in the local elementary schools and host inspirational events at the middle school to drum up some excitement for their robotics team.

When talking to these students, team member William told us that the toughest challenge the team faced was building and constructing the robot. He explained how every little piece that they construct takes hours of designing, printing and planning. Telling us that many times after thinking they have it 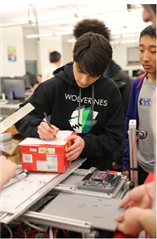 correct it would fail and they are right back at square one. However, William said that spending all that time trouble shooting and problem solving with his mentors and teammates makes it all worth it.

One thing that has helped this team since their 2017 rebuild is their mentors. Former team members have returned to mentor this team and we wanted to know what that meant to the team Eric claimed that the team’s mentors have meant everything to them. Mentioning how much it means to the team that they voluntarily bring knowledge and years of experience to help them succeed. Eric specifically attributes the team’s success to the team’s mentors and says that the team is forever grateful for them. One message that their mentors have left with them is that: It is more about the effort than it is about the success of the team, and that’s what learning and growing is.

Working with Robotics has given Lizzy a new perspective on modern technology. Thinking how technology works internally rather than externally. It makes her really appreciate the ins and outs of engineering and mechanics saying it puts a new view of modern consumer electronics for her. Lizzy would go on to say “Every iPhone and Android device is a spectacle. It is amazing how far technology has come in the last couple of years.”

This team is excited about their future and look forward to competing in events next season. The hope is to make it make to the Championship events as well as to spread more awareness about the team in the community by helping in the area they can as well as to go into the younger schools as mentioned earlier. We look forward to seeing this teams success continue and wish them the best of luck in their off season and into next season.  To see the conclusion of Team 1757: Wolverines season this two minute video, it does a good job of  showing the excitement of the event.