I’m back with another mash-up of high-tech, marketing, and my hobby of antique radio restoration. And, once again, we will be talking about a product from the Philco Radio Corporation. Ever the innovators, the folks at Philco were first, in 1939, with a wireless remote control. Called the Mystery Remote, it enabled consumers with certain Philco radios to turn them on and off, control the volume, and change stations (a future blog, to be sure.) Two years later Philco again wowed the market with “Music on a Beam of Light,” also known as a “Photo-Electric Radio-Phonograph.” 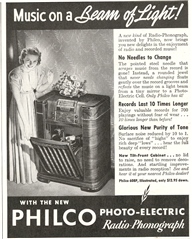 Okay, so let’s unpack all this “beam of light” marketing hype and look at the tech behind it.

The method of reproducing sound had not changed very much since 1877, when Thomas Edison first recorded “Mary had a little lamb” at his Menlo Park laboratory. As Edison spoke a vibrating metal needle impressed variations into a rotating, tin foil-covered cylinder. To play the sound back, those vibrations were picked up by the same needle and amplified mechanically by a large cone. No power needed (electronic amplification was years in the future.) Mass-marketed “Edison cylinders” were all the rage for the next few decades. Competition came just ten years later, when Emile Berliner patented the Gramophone, which played flat, circular discs instead of cylinders. Thanks to the development of Shellac discs, by the time of the First World War the 78 rpm record had become the de facto standard for recorded music. The advent of commercial radio in the 1920s dealt a serious blow to the record business - why buy records when over-the-air programs were free? The Great Depression, which began in 1929, might have dealt the business a mortal wound had not the demand for discs from jukebox owners kept it on life-support.

To the rescue came RCA. In 1934 they became the first to integrate phonographs with radios: “When static interferes… when the program you want is not on tonight’s broadcast… that’s when you’ll most appreciate this versatile RCA Victor Duo Junior.” Unlike its purely mechanical predecessor early electrical phonographs had a magnet at the end of the tonearm which picked up the movements of the needle and translated them into electrical impulses. A more efficient method, utilizing a crystal located inside a cartridge, was the dominant system by the early 1940s. Like its magnetic predecessor the crystal converted vibrations of the needle into electrical impulses. (Engineers and physicists will recognize this as the Piezoelectric effect, the translating of physical change to electric impulses. For those so inclined, there’s more math and physics here.) Pumped through electromagnetically driven speakers the sound simply blew consumers away. Depression be damned, people wanted one of these in their home.

Shellac records had problems. With heavy metal tonearms to ensure phonograph needles would not stray from the groove, records would wear down after numerous plays. Shellac records were fragile and prone to scratches, especially when stacked in jukeboxes or turntables featuring the ability to play multiple records. Owners of combination radio & phonograph sets also noted a pervasive hum picked up from electrical and magnetic sources within the radio.

To mitigate these issues Philco engineers devised a pickup scheme using a beam of light. Surprise, the Marketing department hadn’t gone overboard with hype. It really was a beam of light bouncing off a mirror connected to a sapphire needle. The reflected light landed on a photovoltaic cell which converted the movement into in voltage. These variations in voltage were then amplified by the audio section of the radio as sound from the record. (In some ways this was a precursor to the way sound would be produced from compact discs decades later - only with lasers.) 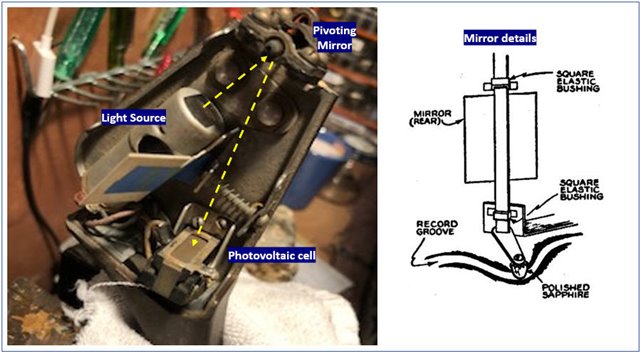 The mirror and associated armature required much less pressure by the needle on the grooved shellac, which extended the life of the record. And, because the light was powered by a pick up of RF energy emanating from the radio (the local oscillator, to be precise) and not by a wired connection to the power supply, there was no AC hum. This very clever design hinged on a special kind of tech at the end of that beam of light. It’s called a photocell. To understand how it works I need to drop a little Einstein on you.

As far back as 1839 scientists and experimenters saw how light could change the properties of certain materials. Over the next seven decades more experiments produced greater understanding of what materials – and under what kinds of light – would produce electric activity. The list of researchers who added to our understanding of this phenomenon – Becquerel, Hertz, Hallwachs, Planck and others – may read like lyrics to a Tom Lehrer song, but their work inspired a Zurich patent clerk to question the very nature of light. It basically boiled down to whether light was made up of waves or particles. (The answer? Both.) Albert Einstein’s 1905 paper on light energy led to the development of quantum mechanics and would earn him the 1921 Nobel Prize in physics for "his discovery of the law of the photoelectric effect." A century later quantum mechanics is still used by scientists in their quest to understand the very nature of the universe.

Which is all well and good, but how does it help us play a Benny Goodman record?

It is not hyperbole to say that every piece of cool tech we have today can be traced to the Becquerels and Hertzes seeing something in a lab they had never seen before and asking “how” (as in “how did this happen” and “how can I replicate this event?”) Some are curious about the hows and whys simply for knowledge’ sake. Others were more like Thomas Edison, who is claimed to have famously vowed never invent anything he couldn’t sell. (As I described in a previous blog, critics of the “Wizard of Menlo Park” would say it was more like he wouldn’t steal anything he couldn’t sell.) We will skip the theoretical physics path and instead look to experimenters who envisioned, à la Edison, practical uses for the photoelectric effect. Like Bostonian George Carey.  A surveyor by trade, in the 1870s Carey read the work of British electrical engineer Willoughby Smith, who had observed how the amount of electric current the element selenium conducted was proportional to the amount of light shining upon it. Carey took Smith’s laboratory observations and came up with… television! 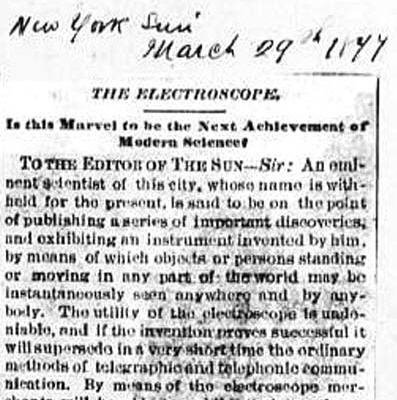 Despite the enthusiasm of the press, Carey’s cumbersome device (which also delivered terribly fuzzy images) wasn’t quite ready for prime time. But the idea of using a matrix of photocells to capture images would later be the foundational idea for digital cameras. In fact, as early as 1883 German engineer Paul Nipkow was taking pictures using a spinning disk and a photoelectric cell. Things really took off with the 1889 invention of an affordable photoelectric cell by Johann Elster and Hans Geitel (known as the “Castor and Pollux of physics” for their lengthy collaboration.) Hobbyists, tinkerers and employees of early tech companies quickly found uses for the photovoltaic cell and its cousin, the photoresistor cell (in which the resistance of the cell drops when exposed to light.) Today, photocells are ubiquitous in consumer products (such as phones and televisions,) factories (as counters, sorters and control systems,) security systems (as intrusion detectors) and hundreds of other applications.

The timing for the release of Philco’s Beam of Light system could not have been worse, coming as it did in 1941 just before the United States entered World War Two. Manufacturers, such as Philco, would turn their factories over to the war effort for the duration. After the war ended in 1945 Philco focused on tabletop radios (as well as the new medium of television) and the company never resurrected its Beam of Light technology. 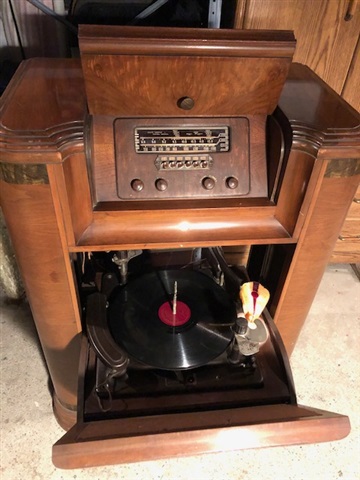 In December, 2019 I responded to an online ad for a floor model radio and turntable combo from Philco. It was only after I got this beast home (damn, it was heavy) and began the restoration process did I discover what I had - a rare Beam of Light record player. Having never even heard of the Beam of Light system I did a search on the Internet and found several collectors (such as Bill Thompson) who shared their success stories bringing their BOL to life. As you might expect, parts for an 80-year-old product in the market for only two years (in 1941 and 1942) are hard to find, but there were several threads on the Antique Radio Forum website started by collectors who, like myself, were starting from scratch (no pun intended.) A few knew of sources for bulbs, which must be of a certain size and beam intensity for the contraption to work. Clever hobbyists have also found modern-day substitutes for the photovoltaic cell (the original usually has stopped functioning,) the most effective being photocells used as paper money scanners in vending machines.

In the photo we see a modern photovoltaic cell sitting nice and snug inside the holder for the original selenium cell: 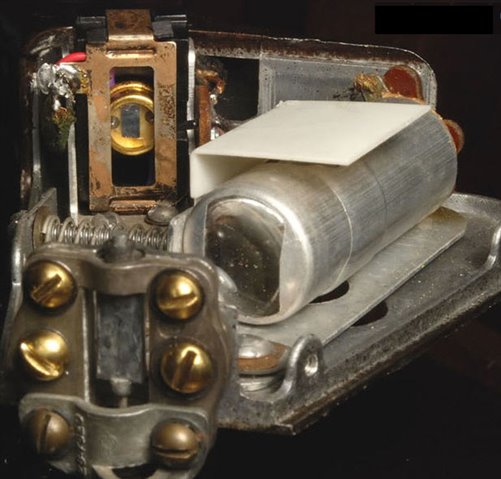 With sources for parts and detailed explanations on how to install and align the beam, I recently got my BOL turntable to work. 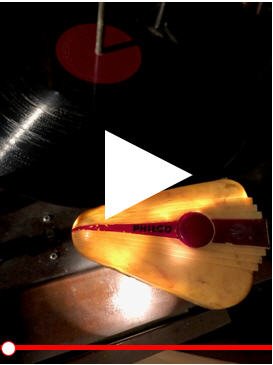 Video of my working Beam of Light turntable

There is something especially gratifying about getting this to work. As I write this article, in 2020, I have a record playing on a turntable that was, in 1941, “state of the art.” The turntable was made possible by technology from 1889 which itself was the result of a scientific discovery made in 1839. Now THAT is going Back to the Future.