It was all Started by a Mouse

The Bramble family was on vacation in France back in 2019 when we visited Disneyland Paris. While waiting for Mickey Mouse in The Parade at the end of the day, I found myself standing next to a man who looked identical to a lecturer I had at Brunel University in London. I resisted the urge to fling my arms around him and thank him for getting me through my degree, considering that, if I had aged by 30 years, my lecturer had probably done so too and maybe this young man would not welcome this new-found friendship.

Wondering if my lecturer was still at Brunel, I typed his name into Google and found that he was still there, 30 years after I graduated, looking older and much wiser. When I returned to the UK, I contacted him and we went for lunch.

“Do you fancy giving a lecture to the students? On any subject you want,” he said. And so began my fledgling career as a (very) part time university lecturer.

The problem many students have is relating what they are learning to real life electronics, so I aimed to translate the electronic theory into electronic practice. I gave a lecture linking math, control theory, op amp theory, electronic design and power supply design, all backed up with LTspice simulations, showing that all these subjects were related. The students liked it and I was invited back the following year.

A year later, my second lecture introduced the different flavors of capacitor to the students, the effect that ESR has on a circuit and some of the pitfalls in using ceramic capacitors. I also introduced them to the reliability of silicon, the Arrhenius equation and how reliability changes with temperature.

Still they kept coming back for more... Last month I gave my third lecture. I was asked to explain switched capacitor circuits which neatly led on to the problems with analog switches and charge injection, the murky world of sampling theory, aliasing and Nyquist Theorem. I even threw in a practical demonstration of Nyquist Theorem. 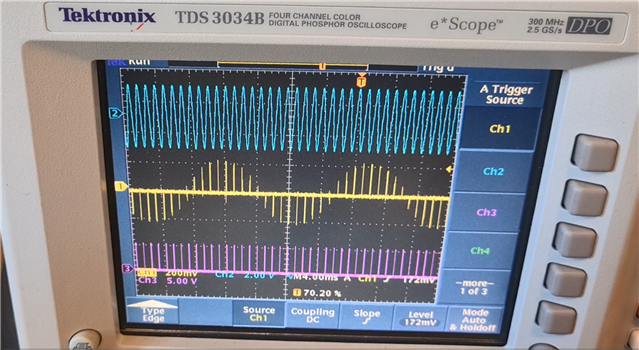 An Oscilloscope Image of Nyquist Theorem in action

I then explained how our quality team investigate component failures, including x-rays of silicon and extracts from failure analysis reports, which then flowed into an introduction to the world of the grey market, component brokers and how counterfeiting works. Scare them while they are young!

Coincidentally, at the same time I started lecturing, Analog Devices UK was attending careers fairs at Brunel (which is about 3 miles from the ADI offices) to recruit the next generation of interns and graduates. This was completely unknown to me until a chance conversation in the office made me realize that other people in ADI UK were also promoting the company inside Brunel. So, as well as the lecturing, I am now involved with interviewing tomorrow’s engineers and promoting ADI to the students. Some of our recent graduates, Sarah Keane, Ahmad Shahzad and Abinaya Karki also gave an excellent introduction to ADI and the exciting careers that it offers.

The coincidences are amazing. Many of my student friends are in other parts of the world, but I still live locally to Brunel University and work for Analog Devices, which is also local and has an active program to recruit their students. Moreover, my lecturer is still there and willing to allow ex-students to lecture… and it all began because I was standing next to someone who reminded me of him. Maybe it is the Disney Magic? Regardless, in the words of Disney, it was all started by a mouse.